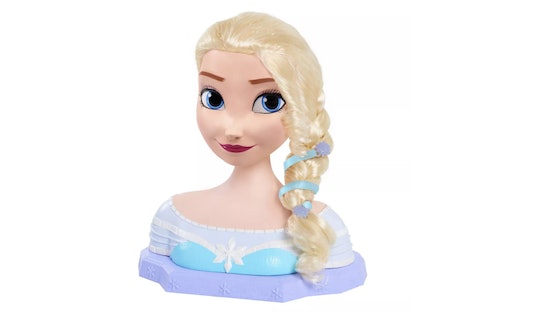 The countdown is on for the release of Frozen 2, but fans of the highly anticipated series have plenty to be excited about right now. Merchandise tied to the sequel is already in stores, including a super fun Frozen 2 Elsa deluxe styling head.

Elsa’s flowing blond locks are a signature part of her princess look, and the styling head lets kids fashion them into whatever hairdos they can dream up. Elsa's iconic braid is far from the only option. The deluxe version of the toy comes with 18 accessories to help mini-hairdressers executive their visions. Those include a ribbon hair wrap (perfect for weaving in and out of the braid), two customizable hair combs, six barrettes, four hair elastics, and a brush — which is snow-flaked shaped, naturally.

The coolest accessories, however, are two color change hair extensions and the accompanying wand applicator and dish. With those tools in hand and the help of a little water, kids can change Elsa's hair from blonde to blue and purple. It's just like magic. There's a spot on Elsa's dress that changes color when wet, too.

The hair accessories aren't just for the Queen of Arendelle, either — they really work, so kiddos can put them in their own hair as well. I love the idea of little ones being able to play around with their own style and test out a brand new look by borrowing Elsa's colorful extensions — without any fuss or mess at all.

The deluxe styling head is listed as appropriate for ages 3 and up, but if you’ve got younger kids in the home, just take note of the fact that those little beaded hair clips can pose a choking hazard. You'll also want to make sure you hide the scissors — because if your kiddo decides to give Elsa a little trim, this hair's definitely not growing back.

Any parent who had lots of disheveled looking Barbies laying around their room as a kid will know that doll hair can easily get matted or knotted. If your Elsa starts to look a little worse for the wear after lots of styling, you might want to have some of these doll hair hacks from Apartment Therapy on standby — some parents even use their own products to tame the tangly mess.

Perhaps if I’d had one of these as a kid, I’d be a lot better at doing braids now — in fact, I might need to think about getting one for my self to practice those YouTube hair tutorials. The styling head is $35 at Target, and I can definitely see it popping up on the holiday wish lists of little Frozen fans everywhere. Once the movie hits theaters on November 22, products like the styling head, Arendelle Castle, and Elsa and Anna dolls could really start flying off the shelves. So check them off your shopping list now while they're still in sock if you anticipate seeing them on their wishlist this year.