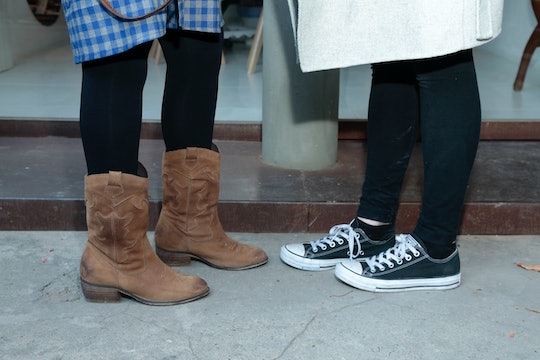 Research has shown that body shaming is harmful and destructive. Tearing someone down for their size can have a discernible impact on that person's mental and physical health. And ethically, body shaming is just plain wrong. But that doesn't stop people from making their comments. Take this principal in South Carolina, who reportedly told girls they had to be a certain size to wear leggings. That size? A zero. (Romper reached out to Stratford High principal Heather Taylor and has yet to hear back.)

Parents have spoken out against Principal Taylor, who allegedly said during a dress code assembly that if students aren't smaller than a size two, they will look "fat" in leggings, according to the New York Daily News. When students reported her comments, Taylor claimed she told students they were able to get away with wearing leggings before because their bodies "had yet to develop," the Daily News reported.

But local NBC News affiliate News 2 received a recording of the assembly, which disproved Taylor's defense. According to News 2, Taylor said,

I've told you this before, I'm going to tell you this now. Unless you're a size zero or a two and you were something like that, even though you're not fat, you look fat.

I'm not a size zero and I kind of felt targeted because of my size.

A parent of a junior at Stratford High also took to Facebook on Wednesday to express her frustrations with the principal and her comments. Lacy Thomspon-Harper wrote in a public post,

Body shaming teenage girls is uncalled for, inappropriate and unprofessional. When I spoke with her, she talked around the issue, and made excuse after excuse, effectively calling all of the students liars.

According to Thomspon-Harper's post, Taylor had agreed to apologize to students for her offensive comments by the end of their conversation. She continued,

Is this enough? I don't know. But, I feel that parents need to know what was said by a woman who is an educator, and is supposed to be a role model for these kids. Right now, I'm a very angry parent, with a very angry daughter.

It's unclear if the apology will be enough for parents or students. Body-shaming comments can have damaging effects on youth and adults. The National Eating Disorders Association estimates that bullying such as body shaming was a contributing factor in eating disorders for as many as 65 percent of people. And, according to Vice, about 94 percent of teenage girls in the United States have been body shamed.

What Taylor said could have serious effects on young women, no matter which way you want to slice it. No one should judge teenage girls for how they dress and what their bodies look like.