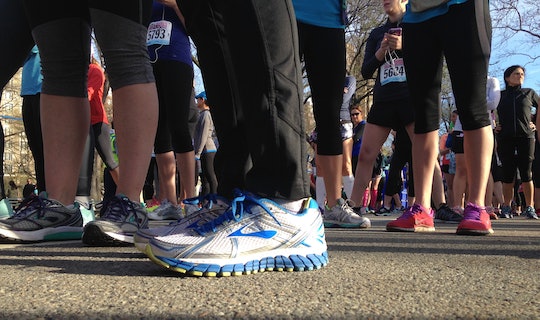 This Professional Runner Shared Postpartum Photos That All Moms Should See

Olympic hopeful Stephanie Rothstein Bruce didn't think she was doing anything special when when began posting photos of her post-pregnancy body on Instagram and sharing stories of her post-pregnancy struggles on her blog, but she was. In fact, Bruce's photos were beyond special, they were perfect. Why? Because Bruce's photos were honest, candid, authentic, and beautiful. And now, after unexpectedly going viral, the professional runner is inspiring moms on Instagram and beyond.

In an interview with TODAY, Bruce revealed her motivation for posting the photos:

I was just being real and sharing the truth [because I felt alone]...not a lot of women like me [professional runners and athletes] had shared this stuff. I got back to training and still had a lot of incontinence and problems, and I was like, does this happen to other women? So I just put it out there — and [apparently] it does!

But Bruce not only found support, she became a support for others. Because Bruce isn't alone. Her pregnancy and post-pregnancy stories are stories almost every mom can relate to. Post-baby body image issues are something many moms can relate to, and to see someone so powerful and strong embracing their "flaws" is bold and beautiful and awe-inspiring.

Yet even though Bruce has been sharing postpartum belly photos for several months — she began posting photos immediately after the birth of her second son in Sept. 2015 and continues to do so today, according to People — she doesn't see herself as exceptional or extraordinary. In fact, as she explained to TODAY:

I don't think I'm this super inspirational person. I just keep it real and I want to share with women that they're not alone.

But, regardless of how Bruce sees herself, it is apparent others see her as an inspiration, as her Instagram is full of "thank yous" and positive and uplifting messages like this one: "You are the definition of fearless! Those aren't #stretchmarks, they are #STRENGTHmarks Absolutely beautiful!"

And I — a woman, mother, and runner — have to agree: Bruce's honesty is inspiring. Her confidence is contagious, and the way she embraces her family and her career is inspiring.

Bruce is an inspiration.