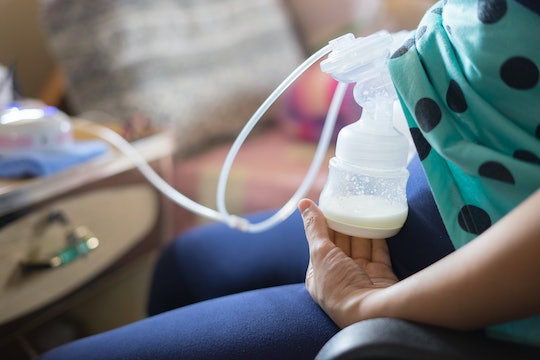 The world, by and large, expects new mothers to breastfeed their babies, but does very little to actually support the practice. If you've ever received a dirty look for nursing at a restaurant, or been relegated to a supply closet to pump at work, you know when I'm talking about. This story of a male airport employee walking in on a pumping mom will absolutely infuriate you, and believe it or not, it actually gets a whole lot worse than it sounds.

Twitter user Sophie McBain shared her disastrous experience in a viral thread on Sunday. She was traveling through London's Heathrow Airport without her baby, she wrote, and when she needed a place to pump, a staff member directed her to a baby changing area. McBain said that she didn't like the idea of taking up the space for a long period of time, but when you have to pump, you have to pump. Eventually, another passenger did need the room for its intended purpose, but McBain didn't hear them knocking, so they summoned an employee to unlock the door. After finding her "still attached to a machine with my breasts out," as McBain put it, you'd think he'd offer a hasty apology and get out of there. You'd be wrong, unfortunately.

This dude actually had the gall to scold McBain for wanting a bit of privacy while milking herself, telling her she should have either left the door unlocked or pumped elsewhere. Never mind the fact that a baby changing room is basically a bathroom where nothing gets flushed, which is a gross place to be, and all McBain was looking for was a locked door between her naked breasts and a bunch of complete strangers, and she couldn't even get that.

While this sounds like a pretty mortifying experience, McBain took it in stride, telling her followers that as she's been breastfeeding for nearly a year now, she's "quite resilient to embarrassment but had this happened when I was more new to it all I know I would have been so shaken up." She's more concerned about the possible outcome if this happens to another mom, and she explained that "it felt important enough to write publicly because this is the kind of thing that makes women stop breastfeeding before they really want to." It's not about calling out one clueless employee, either, but rather the situation that led to the incident in the first place. Why wasn't there a more appropriate place available for her to pump? The initial response she received from the airport's social media account claimed that other rooms were available, and after filing an official complaint, the reply was, shall we say, less than satisfactory.

This response not only excused and minimized the employee walking in on McBain, but completely disregarded the root cause of the problem: that she was forced to pump in a changing room. A representative for Heathrow provided Romper with the following statement:

The response Ms. McBain received following her complaint did not reflect the level of customer service we strive to offer. We apologize the initial reply was handled in the manner it was and regret the experience Ms. McBain had at our airport. We are working with our colleagues to investigate this incident and will be taking actions to improve service delivery, tailored to individual passenger needs.

The Heathrow rep also told Romper, "we are working to address the issues identified here and ensure an incident like this does not occur in the future." McBain posted another Twitter thread the following day, clarifying that although her experience was akin to "someone bursting in" and "calmly telling you, while your pants are still round your ankles, that you are hogging the public bathroom," that wasn't the point. "I made clear I didn't want to get anyone into trouble," she wrote. "The real problem is with the institution that clearly gives no thought to the needs of BF women." Heathrow offers dozens of baby changing rooms throughout its four terminals, according to its website, but there's only one "discreet area for nursing mothers" in the entire airport, and it's closed for nine hours a day. Will this incident prompt the airport to create more? Breastfeeding moms can only hope.