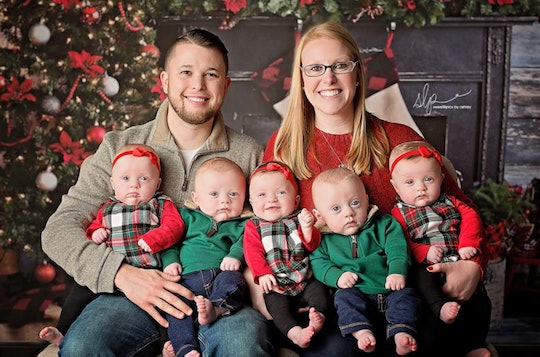 Courtesy of Ashley Childress/Sweetlilpics by Ashley

A lot of parents feature their kids in holiday cards and photos for friends and relatives, and the Driskells are no different. They just happen to have five new babies to show off this year, instead of just one. Briana and Jordan Driskell's 7-month-old quintuplets look extra cute in their holiday photos, and thanks to the internet, it's not just friends and family who get to enjoy the adorable shots from their first Christmas photoshoot.

Briana told Us Weekly that getting holiday cards in the mail from friends in recent years was actually a very bittersweet experience. She struggled with infertility, and every personal holiday card that featured a smiling, happy family was difficult for her to enjoy without also feeling a bit of sadness because she was struggling to have children herself. She told Us Weekly:

That was so hard for me. Of course I was happy for my friends, but at the same time, I dreaded opening the mail. It was painful because all I ever wanted was to be a mom.

But this year will be different. After two years of hoping, Briana and her husband welcomed their quintuplets — Zoey Hart, Dakota Faith, Hollyn Grace, Asher Blaze, and Gavin Lane — on May 2. That gave them plenty of time to come up with some super cute holiday photoshoot ideas by the time Christmas card season rolled around.

Shocked would be an understatement...happy, excited, scared, nervous, worried.

Those emotions seem typical for any expectant parent, but Briana and Jordan had to multiply all of them by five.

And though they've been kept very busy the past few months with their quintuplets, it's clearly all been worth it. The Driskells got a unique opportunity to show off their little ones with a Christmas-themed photoshoot on Nov. 19, with incredibly sweet photos shot by newborn photographer Ashley Childress.

Briana says that she actually handmade the little onesies the babies are wearing in the photoshoot, which is so freaking impressive. Briana says she was worried about how the babies would act during the photoshoot, but as it turned out, she had no reason to be concerned. She told Us Weekly:

I thought they were going to be crying and screaming the whole time...They only cried when we changed outfits and when they got hungry.

And yes, after all the effort that went in to making that photoshoot happen, Briana and Jordan do plan to use the photos for their own holiday cards this year. In fact, Briana has a pretty cute idea for those cards; she told Us Weekly, “While Ashley was taking the pictures, I was thinking, ‘I can’t wait to order our Christmas cards. Each one is going to say, Merry Quintsmas!'”

This wasn't the first time the Driskell babies were so well-behaved for photos, either. The "Driskell Quints" Facebook page shows that these babies definitely know how to rock a photoshoot, no matter the theme.

So that Christmas-themed shoot they just did will likely not be the last one the Driskell kids' parents dress them up for — I mean, with pictures like this, how can they resist?

With Thanksgiving just days away, a lot of families will be asking each other what they're all thankful for. And for the Driskells, having five healthy, thriving, adorable babies is probably at the top of the list.