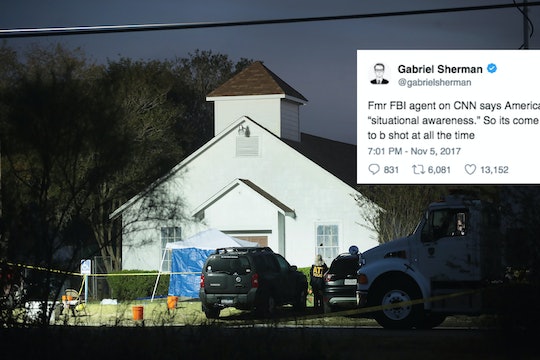 Only 35 days after the nation's deadliest mass shooting in modern history, Americans were faced with the news of yet another massacre, this time in a church in the small Texas town of Sutherland Springs. At least 26 people died in the shooting, with the youngest victim being a 17-month-old child, according to CNN, and if nothing else, it seems like we should at least be able to agree that the incident was an act of senseless violence that is entirely unacceptable. But the frequency with which these shootings occur seems to be changing the conversation: parents will be terrified by this quote from a former FBI agent about the Texas church shooting, as it seems to suggest that mass shootings have more or less become an unavoidable reality of American life we need to adapt to.

As is the case with every mass shooting in recent history, Sunday's shooting in Sutherland Springs reignited the ongoing debate about the need for greater gun safety restrictions in the United States. On one side, gun safety advocates argue that if the country followed the example of pretty much every other wealthy nation and made it more difficult for citizens to purchase firearms, mass shootings would be less likely to actually occur. On the other, gun rights advocates argue that doing so would infringe upon their rights, and that it would actually be much safer if more people were armed to stop mass shooters from taking more lives. The problem? The lack of progress has left enough space in the middle of those two positions that some have begun to argue that it's ultimately up to the American public to learn how to minimize their own risk in an active shooter situation.

In a tweet Sunday, writer Gabriel Sherman noted that, in an interview with CNN regarding the shooting, a former FBI agent reportedly told the outlet that "Americans need to have 'situational awareness'" to protect themselves during mass shootings. On the surface, that might seem like it could be valuable advice, and it's a concept that often gets discussed in the wake of a massacre. After the Las Vegas shooting in October, Chicago's WGN9 news shared tips from personal safety consultant Doug Cummings about ways to up your chances of survival during an active shooter situation, for example, and situational awareness — that is, paying close attention to what is happening around you at all times — was one of them. As Cummings told WGN9, "One of the key things about being aware is that it gives you a couple of minutes of extra time, sometimes to be able to flee or take some kind of an action."

But when conversations about situational awareness and escape routes are taking place without anyone actually addressing ways to prevent mass shootings from happening in the first place? That has to be considered a pretty glaring problem. Kyle Clark, a reporter with 9News, retweeted Sherman's tweet, saying "What situational awareness should a 5-year-old have had in church?" And it's a terrifying, important point.

The United States is a country with some of the most relaxed gun ownership laws in the world, according to a Vox analysis, and, as CNN notes, it also has more public mass shootings than any other country. But while it seems like the horror of continuing to watch innocent people get shot and killed should be enough motivation to consider that it might be time to do things a little differently, that hasn't even sort of been the case. Not convinced? When asked about the Sutherland Springs shooting during a news conference in Tokyo Monday, the president downplayed the idea that stricter gun safety laws might be needed in the United States, and actually said that the shooting "isn't a guns situation," according to The Washington Post:

Yet with no semblance of any plan or intention to actually address mental health issues in America, the same man who only a week ago quickly called for "extreme vetting" of foreigners in order to protect the country from the threat of terrorism literally denied that mass shootings have anything to do with guns.

But it's not just the government's lack of action, or even their lack of outrage, that matters here. It's the fact that in its place, we are continuing to normalize massacres by telling people they have the ability to protect themselves. Whether that's even true or not, it entirely misses the point that they shouldn't be put in the position where they need to protect themselves. That goes for all Americans regardless of age or circumstance, but it becomes even more true when you consider that the youngest victim of the Sutherland Springs shooting was only 17 months old.

Like the 20 kindergarten students at Sandy Hook elementary school who were shot and killed by a gunman with a rifle similar to the one used in Texas, according to The New York Times, that child's life was taken with no regard. How could we possibly turn around and expect to have reasonable conversations about "situational awareness," when parents now have to send their children to school each day knowing that nothing has actually been done to prevent another shooting from happening? Or when parents have to sit in church surveying the exits and every curious-looking parishioner in case they have to grab their children and flee? You should not have to teach a 6-year-old "situational awareness" for school.

Discussions about personal safety are valuable, and given that innocent people can and do become victims of all kinds of violence on a regular basis, there's no use in pretending that that's not the case. Right now, mass shootings are a reality that Americans are living with, whether they like it or not. But without actual, meaningful changes, and without leaders who are committed to tackling the issue of gun violence head on, teaching personal safety ultimately becomes a way of unfairly shifting some of the responsibility onto the shoulders of the general public — and, of course, the victims themselves.

The frequency of shootings like those at Sandy Hook and in Sutherland Springs is the very reason why our kids are now taught to do lockdown drills at school, the same way that they practice fire drills. But for parents, they don't exactly feel reassuring. For while we know fires can happen, we don't exactly have to worry about arsonists dousing their classrooms in gasoline and lighting a match without warning. The lack of movement on laws and regulations that would raise the bar for gun ownership in America means that parents are left knowing that their kids are targets. Instead of continuing to allow gun violence to be part of life that we have to live with in the name Second Amendment rights, it needs to become unequivocally unacceptable.