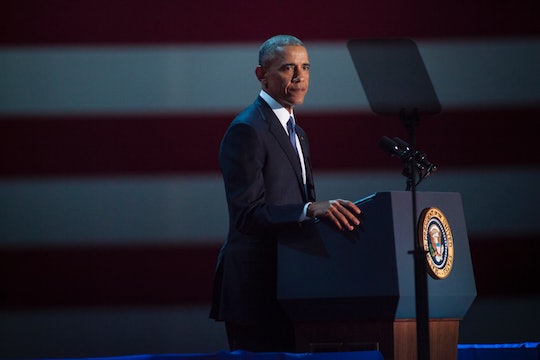 President Obama delivered his official goodbye speech to the nation Tuesday night, and for many people, it was honestly pretty emotional. Given the fact that President-elect Donald Trump will very soon be sworn in as the next POTUS — a fact that many, many Americans are feeling upset, angry, or even downright fearful about — having to watch Obama say goodbye was particularly difficult. But, in Obama's usual composed, polished and, well, presidential style, he didn't leave us without sharing encouraging words of wisdom and hope for the future. Although his speech was full of meaningful messages (including a beautiful tribute to his family, and also Vice President Joe Biden) given the many issues the country is facing right now, this quote from Obama's farewell address is the one we need to hold onto for the next four years — especially if you're worried about what's to come.

In his final speech, which he opted to give in his hometown of Chicago, Obama spent some time reflecting back on his presidency and touched briefly on his achievements. But more than anything else, he seemed to use the speech as a call to action. More than just being his goodbye, Obama's farewell seemed to be an opportunity for the President to remind the nation not to give up, to unify, and most importantly, to fight back.

There were numerous important takeaways from Obama's speech that seem especially valuable so close to President-elect Trump's inauguration, but one that stood out in particular? Obama's comment on the Constitution — specifically, that it was basically meaningless without the continued engagement and fight of the American people, according to The New York Times:

Whether or not we stand up for our freedoms. Whether or not we respect and enforce the rule of law, that’s up to us. America is no fragile thing. But the gains of our long journey to freedom are not assured.

It's hard to imagine a time in recent history when the country — and even the world at large — was more divided in their opinions about what's to come. To many, Trump's win has been a sign that the values Obama has held as president over the last eight years — fairness, equal rights, rising above, respect — will soon be disappearing. To others, that very same event symbolizes the kind of change they've been longing to see, a supposed return to a time when the government was on their side, and hope for a more prosperous and safer country. Obama leaving, it seems, is considered by most Americans to be either the best or worst thing that could possibly happen right now, with few people appearing to land in the middle of those two opinions.

But as Obama so aptly noted during his speech, if you are sad about him leaving, if you are fearful about a Trump presidency, it's not enough to stop there. Even if Trump does want to dismantle institutions that are important to a large segment of the population, it doesn't mean the only option they have is to sit and grumble about it. Anyone who believes in Obama's values and wants to see them live on has to work to see that happen. And that's a fight that should never be abandoned.

But the fact that Obama brought up the Constitution specifically is perhaps also especially important, given the ongoing debate by many anti-Obama Americans who believe that the President hasn't respected fundamental American rights and freedoms, and that, as POTUS, Trump will finally restore that once and for all. Unsurprisingly, many people took issue with Obama's comment that the Constitution is "really just a piece of parchment," and claimed on social media that his remark was further proof that he doesn't take the document seriously.

What Obama really seems to be saying though, is that we have to look beyond the notion that the Constitution is itself somehow independently all-powerful and all-knowing, as though it magically sprang into existence spontaneously. What it represents is the continued priorities and values of the country, and it needs to be actively supported and protected if it is continued. Most importantly, perhaps, Americans need to fight if anyone tries to threaten it — because, after all, the country will inevitably still continue after Trump's presidency has ended, for better and for worse.

It was hard to see Obama say goodbye to the nation Tuesday night, and for many, it will likely continue to be very hard. But he didn't just leave the country with some nice parting words about reducing the number of uninsured Americans or improving the economy, even though he could have. What he did was remind all of us that government is about so much more than just the man elected to the White House. And that, even if you are worried about Trump, there is still so much you can — and should — do to stand up for America.