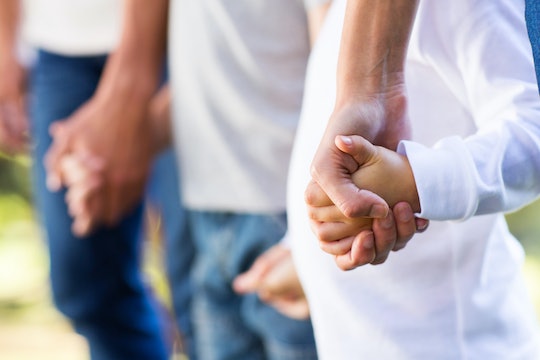 The recent onslaught of allegations of sexual assault, harassment, and rape aimed at Hollywood producer Harvey Weinstein have been both heartbreaking and horrifying. Weinstein's rep has denied any allegations of non-consensual sex, but the scandal has ignited a crucial conversation that goes far beyond the alleged acts of one man. Using the hashtag #MeToo, Twitter users have been tweeting about their own experiences with harassment and sexual assault to show just how pervasive a problem it really is, and it's been powerful. But, for parents, it's also a brutal reminder of the danger facing our kids. This response to the viral #MeToo trend though is an incredibly valuable reminder that, while sexual abuse and assault are devastatingly common and not properly discussed nearly enough, there are many things we can do to help equip our children with knowledge and skills that may help protect them from — and prevent them from becoming — predators.

For many millennial parents, the lessons we learned about safety growing up were things like looking both ways before crossing the street, not answering the door when you're home alone, and not talking to strangers. The idea then, of course, was to protect kids from so-called "stranger danger," or the possibility that someone we didn't know might try to lure us with candy, or abduct us from public places when our parents had their backs turned. Unfortunately, those incidents do occur, but the truth is that stranger danger is far from being the biggest threat kids face.

Like the sexual harassment and assault of women, child sexual abuse is both quite common, and something that isn't often discussed. Yet, in both cases, keeping quiet about it is part of the reason why it continues to be such a problem. In a Twitter thread linked the #MeToo movement, user @a_silent_child spoke up about many of the aspects of child sexual abuse that are often overlooked, and yet, are so important for parents to be aware of. (Note: The following tweets contain graphic descriptions of childhood sexual abuse that might be triggering for some readers.)

To start, they emphasized the need for parents to teach children the proper names for their genitalia. Even though it might seem cute to use nicknames, it ultimately makes it harder for a child who has been abused to explain what has happened if they're unable to communicate in a way someone else can clearly understand. Not convinced? @a_silent_child explained,

Many years ago a girl in my area told her teacher that her father was performing oral sex on her, but the teacher didn't help her. Not because the teacher didn't care, but because they weren't using the same language. What the little girl had told her was 'last night my daddy ate my Cupcake.' It was only discovered later what she meant, after the young girl had already been dismissed by the adult she got brave enough to confide in.

They also noted that when a boy knows to say penis, or a girl knows to say vagina or vulva, it sends an important message to potential predators that those children have been taught by an adult who is likely paying attention, and that they may be more likely to tell on the predator using words that will be clearly understood.

Other important tips? @a_silent_child suggests that parents ensure they talk to their children about sex without judgment, and that they do it from a young age. Parents should also let their children know that no one has the right to touch them in any way that feels uncomfortable, no matter who that person is (even Mom and Dad), and that, if anyone tries, they can (and should) speak up — loudly.

But it's not just children who have to be aware. @a_silent_child notes that parents and caregivers need to be vigilant for possible signs of grooming, even (and perhaps especially) from those children are closest too. Is there someone in their life they suddenly don't want to visit, or maybe someone who is lavishing them with gifts in an attempt to win them over? Is your normally-happy child showing signs of anxiety, reclusion, or are they complaining of stomach aches?

None of this stuff is likely anything any parent actually wants to think about, but experts stress that it is so important. According to Lauren's Kids, a Florida-based organization advocating for child sexual assault awareness, stats show that as many as 1 in 3 girls and 1 in 5 boys are sexually abused before the age of 18, and that a whopping 90 percent of child sexual abuse victims know their abuser. That's harrowing, yet it underscores the need to take it seriously, talk openly about it, and give our children the resources and awareness they'll need to have the best chance possible if an abuser enters their lives.

@a_silent_child's thread is uncomfortable to read, and chances are, most parents would much prefer to not think about having to discuss sexual abuse with their kids. But according to the Rape, Abuse & Incest National Network (RAINN), the comprehensive thread is pretty much spot on. RAINN similarly recommends that parents become as involved as possible in their children's lives, getting to know what they do in the day and who they do it with. RAINN also emphasizes the importance of recognizing warning signs of sexual abuse, and of allowing children to know they have control over their bodies and boundaries, and that they will always be believed if they have something important to share.

As painful as it is to consider our children as potential victims, the reality is that child sexual abuse — like all sexual abuse — is pervasive, and still not discussed openly in a way that it needs to be in order to effect real change. Sexual abuse, after all, thrives thanks to shame and secrecy. While we may not be able to shield our children from predators, we can at least empower them if and when they ever encounter them. Not only will those skills serve them as young children, it will also hopefully allow them to grow into adults who don't ever have to feel ashamed or responsible in any way if they one day have to say #MeToo.