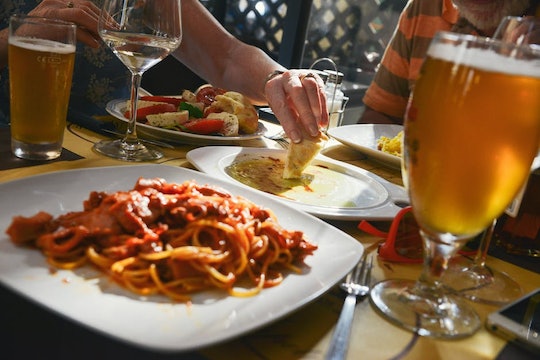 Going out to dinner with kids can be a mission. You’ve got to make sure your tiny diner is welcome in the restaurant and then you need to see if you’ll be able to find something kid-friendly on the menu. And that's not always an easy feat. So when you’ve found the perfect place and you’re finally settled comfortably at your table, it might be time for one (or two) well-deserved adult beverages. But, one restaurant’s drink policy for people with kids has some parents puzzled as it limits those over 21 years old to one beer, cocktail, or glass of wine if they’re dining with their little ones.

Peddlers Bar & Bistro in Clifton Park, New York — outside of Albany — enforces a one drink policy for adults who are dining with children. A message on the menu and on the restaurant's website reads:

The Commitment to end Fatalities from Drinking and Driving requires ALL of us to participate. Each of us take [sic] part in our own unique way. We at Peddlers will limit one of the responsible adults to 1 alcoholic beverage while dining with children. Our goal is to protect all children dining with us. We appreciate the respect that we anticipate you will show for this policy.

While some have questioned whether this restaurant has the right to enforce such a policy, it is legal for the owners to have it in place. According to The Times Union, "the law says nothing about limiting drinks for whatever reason, other than it being illegal to serve someone who is obviously intoxicated." As such, Peddlers Bar & Bistro can legally deny someone a drink for whichever reason its staff deems fit.

Legalese aside, the public is still rather divided on the one drink policy. Some diners have praised the restaurant for having it, while others aren't entirely on board with the management's rationale.

For example, one Yelp reviewer wrote of the policy: "I want to commend them on one of their policies: if there are children at the table, the designated driver may only have one alcoholic drink. Awesome!"

However, another diner wrote on Yelp that the message on the restaurant's menu was "a piece of paper stating their policy of being a good parent." Another reviewer called the policy the "oddest thing" and asked if drunk driving in the neighborhood is "in that bad of shape that a restaurant has to be 'big brother'?"

While this restaurant's policy may seem strange and perhaps a bit unnecessary to some, Peddlers Bar & Bistro can enforce it. And although not everyone agrees with it, it's hard to argue with the underlying message behind the policy — even if it comes off as overreaching.