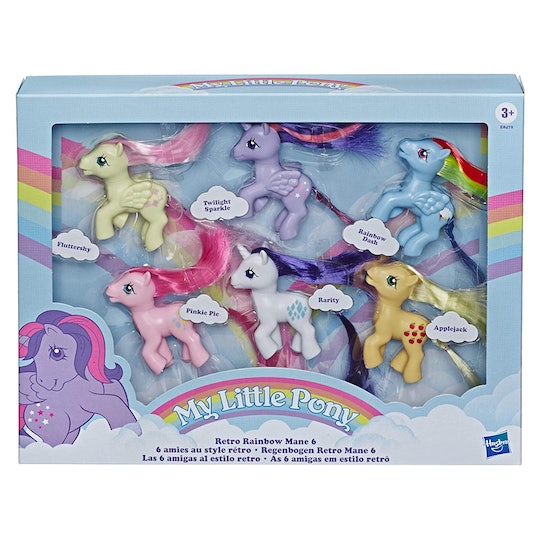 I am currently obsessed with all things 1980s retro, thanks to my utter devotion to the show Stranger Things. I want the My Little Pony sets, the Atari video games, and all the retro tees I can wear. And I am not alone. Millions of viewers all over the globe are completely besotted with the peculiar world of Eleven, Hopper, and Nancy. Their set is an '80s and '90s kids' toys and tchotchke paradise. Companies want to harness this power of the cultural zeitgeist, which is why the new Amazon exclusive retro rainbow mane My Little Pony makes so much sense.

The retro My Little Ponies were inspired by Stranger Things characters Erica and Dustin's love of the show, which is such a huge theme in the connection of the two. Along with the launch of the new Amazon exclusive retro rainbow mane My Little Pony ($25, Amazon), they have also launched a "Pop Up Video" style YouTube series version of the original cartoons, featuring hilarious commentary on the often cheesy and always over-the-top show. It will likely go over your children's heads, but you'll laugh your butt off while you both play with the six 3-inch figurines in the collection.

If you've seen a recent episode of My Little Pony, you know that it resembles little of what millennials will remember from their own childhoods. They're more sophisticated, have entirely more backstory than we were ever given, their bodies are shaped differently, and even their cutie marks are only a ghost of what they were. I remember the first time I saw Applejack in my daughter's hand, I thought, "Where'd all her apples go? She's only got like, three." Now, thanks to Amazon and My Little Pony, my daughter will get to experience Applejack in her full "bushel of apples" cutie mark glory.

As a child, my Rainbow Dash doll got into all sorts of trouble. She was found at the bottom of my grandmother's "peeing cherub" fountain, in the bucket of flour, and frequently half stuck in the bathtub drain. My daughter's My Little Pony dolls have met similar fates. She uses them in all sorts of weird, fictional scenarios. However, with this new, retro set, I will be making one hard and fast rule: they can not, will not, ever be used as tokens in a Dungeons and Dragons game. Because I have absolutely no desire to open a gate to the Upside Down, and I don't know any telepathic preteens.

The collection (that will not be summoning any Demogorgons) features perennial favorites Twilight Sparkle, Pinkie Pie, Rainbow Dash, Rarity, Applejack, and Fluttershy, and will be released this fall. It's available for pre-sale now, and if we've learned anything from Stranger Things, it's that it's better to be prepared than to be stuck in the moment like Joyce and Hopper. That never ends well. I mean, it could sell out, and then where would you be?

These will sell out, because it's not going to be just children that want them. Anyone who grew up with the iconic Hasbro toys are going to be all over this release, decorating their bookshelves and cubicles with the ephemera of their childhoods. I know that I certainly want a set. And because I work from home, no one will judge me for it. I can brush their hair to my heart's content without anyone being the wiser.

I should probably buy two sets, because my daughter is likely to damage them in her quest to have them save the world. Who knows, maybe she can help Eleven out with her little problem. Stranger things have happened.