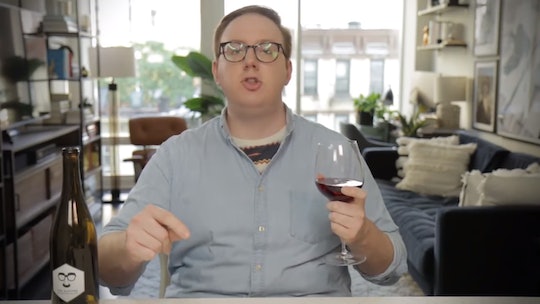 Just to be clear, there's no one right way to parent. Every kid is unique, different families have different values, and most moms and dads are definitely doing their best and totally nailing it. That being said, let's all watch podcast host Matt Bellassai rant about the worst types of parents, because if you're not the one actually saying it, nobody can accuse you of judging other people, right? And if you watch it all alone, and a giggle or two slips out, or maybe you start screaming enthusiastically at your screen about how your sister is raising her kids all wrong... Well, I certainly didn't hear anything.

This isn't the first time Bellassai has skewered breeders and their spawn; he's the author of Buzzfeed's wildly popular "27 Reasons Why Kids Are Actually The Worst" (literally just a bunch of photos and GIFs of kids crying and falling down) and he took on the topic again for "Whine About It," a Buzzfeed video series that featured Bellassai getting drunk on wine and complaining about a new subject each week. He's moved on from Buzzfeed to host the Unhappy Hour podcast, but the spirit of "Whine About It" lives on in a new series called "To Be Honest."

If you can't watch now, I'll give you just enough to tempt you to come back later, and maybe get you a little worried that you made the list. Raise your hand if these descriptions remind you of anyone you know.

Parents Who Think Their Kids Are Special

"For every talented, gifted child in the world," Bellassai says, "there's got to be at least 50 kids who have gotten a peanut M&M lodged in one of their body holes." I'd argue that some kids can be totally gifted in one skill and a complete dolt with others, but yeah, I'm picking up what he's laying down.

Or, as Bellassai refers to them, "those parents who think their child is allergic to a speck of dust that floats onto their fragile skin. They're always like, 'Oh, Sophia has a severe allergy to that shirt you're wearing.'" Sorry, dude, but I am totally using that line on the next person who crosses me.

Parents Who Can't Tell Their Children No

"You’re out here creating tiny, terrifying monsters all because you can’t tell your haunted doll of a child he can’t have another scoop of ice cream." Be sure to stick around for several excellent horror movie references which I don't dare spoil.

Bellassai insults your popcorn and your son before concluding, "nobody wants to buy any of your nonsense when Girl Scout cookies are a thing." Hell yeah to the Samoas, but if your kid is selling that really nice reversible wrapping paper, I totally want some.

"Nobody cares about children's sports," Bellassai insists. "Not even the children." He also compares watching kids' sports to watching pigeons eat bread, but you'll have to watch the video yourself for the punchline.

And there's more! So much more! There's a Kohl's shout-out, a Blockbuster reference (is he even old enough to remember them?), and something called a "radioactive Diet Mountain Dew baby." And yes, I've totally seen most of these parents in the wild, but you know, I don't judge.

More Like This
10 Moving & Informative Documentaries About Martin Luther King Jr.
We Ranked The Best (& Worst) Games Our Kids Learned From 'Bluey' — You're Welcome
New Research Finds Parents’ Mental Health Improved During The Expanded Child Tax Credit
Marcel The Shell Is Heading To The Oscars!
What Parents Are Talking About — Delivered Straight To Your Inbox