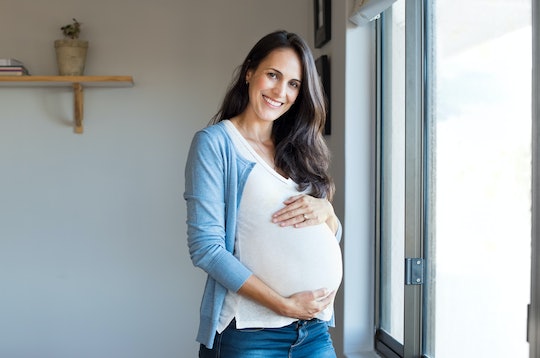 Until recently, only one person has had the opportunity to carry a child in their womb for any given pregnancy. Because that's just how human gestation inherently works. Whether it's a heterosexual couple conceiving with or without medical intervention, a single mom using IVF, married women using IVF, married men using IVF and gestational carrier, (or whatever combination of fertility treatments/partners/surrogates) once an embryo is inside of a uterus, that's where it continues to grow for the duration of the pregnancy. However, this same-sex couple is the first to carry the same baby in their wombs. And the details are simply fascinating.

As ABC News reported, Ashleigh and Bliss Coulter — who have been married since June 2015 — made medical history earlier this year when Ashleigh gave birth to their son, Stetson on June 4. The Mountain Springs, Texas, couple knew they both wanted to be involved in a potential pregnancy. What they didn't know is they would both get the opportunity to carry their baby boy. See, typically couples will use a sperm donor to conceive, and then one mother will carry and deliver the child. But thanks to a revolutionary fertility treatment called reciprocal effortless IVF, both moms can now get in on the baby-incubating action, according to ABC News.

So here's the lowdown. As People reported, eggs from Bliss —along with sperm from a donor — went into an INVOcell device, that was then placed inside Bliss's body for five days. “She got the embryo off to an early start,” said Dr. Kathy Doody, Bliss and Ashleigh's fertility doctor. “The eggs fertilized in her body and when they returned five days later, we removed the device and froze the embryos.”

Traditionally, incubators are used in labs to "remove toxins and try to maintain a supportive environment for the embryo," according to USA Today. "It turns out, not surprisingly, that the woman's own body is a very good incubator," Doody said, about INVOcell. "We have livers, kidneys and lungs, so we're able to provide those same services to the embryo more naturally."

Meanwhile, Ashleigh received estrogen and progesterone — and then doctors waited for the right time to transfer the embryos into Ashleigh's uterus. She became pregnant on the first try.

Another bonus to effortless IVF using INVOcell — aside from the fact that two different women are able to help carry the same baby? The cost. Traditional reciprocal IVF using lab incubators typically costs between $15,000 and $20,000. However, reciprocal effortless IVF was only about $8,000 with medication, according to USA Today. "She got to carry him for five days and was a big part of the fertilization, and then I carried him for nine months," Ashleigh said. "So that made it really special for the both of us — that we were both involved. She got to be a part of it, and I got to be a part of it."

We know that there are a lot of same-sex couples out there who want to do the same thing. We want to publicly be out there and let the LGBTQ community know that they do have options and it’s possible.

Okay, it's settled: The progress of fertility medicine is officially amazing. Especially after so much tragic and devastating news as of late, it's nice to see something positive in the news. Congrats to Ashleigh and Bliss on their sweet little guy and their unique journey to motherhood.

More Like This
Pelvic Pain During Pregnancy: What Causes It & How To Deal With It
What Is Acid Reflux Tape? Chrissy Teigen Swears By It
D-Mer Syndrome: Will It Come Back Again?
Parents Are Missing Work At Record-Breaking Rates To Take Care Of Sick Kids