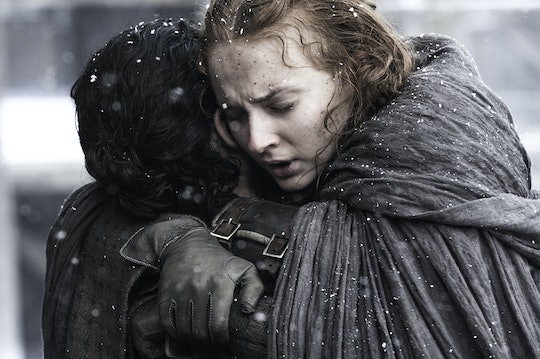 On Sunday night's Game of Thrones, the moment we've all been waiting for finally came to pass, the reunion of at least two Stark children. Sansa and Brienne of Tarth rode through the gates at Castle Black and everyone's collective hearts stopped – including Jon Snow and Sansa's – as they saw one another for the first time. Though way back in Winterfell Sansa and Jon were never particularly fond of one another, they ran into each other's arms and for one brief moment every Game of Thrones fan the world over was actually happy.

While the siblings were reminiscing about how Sansa was "occasionally rather awful," and Jon sulked in a corner while the rest of them played, Sansa at one point remarks, "I wish I could go back and tell myself, don't go, you idiot." Girl, we all wish we could have told you that, but maybe there's one person who could. Is it possible that Bran's Greenseer powers can actually change the past, and Bran could warn all the Starks not to leave Winterfell? This is Westeros, anything is possible.

Right now, there are an almost unbelievable number of Game of Thrones theories circulating the Internet. Some of them are likely, and some less likely (for example, there's a theory that Westeros is an apocalyptic future world). One of the theories that book and show fans have been discussing — at length — is the possibility that Bran's abilities might have the power to affect the past. There was a moment in Episode 4 in which we saw the Tower of Joy for the first time through Bran's eyes, and Bran called out to his father... who seemed to respond. Well, he stopped and turned as if he'd heard him. Though Bran's mentor insists that you cannot change the past, Bran is not convinced.

At the moment, it looks like the recently reunited sibling duo Sansa and Jon are on their way back to Winterfell to rescue Rickon and take back their home. Interestingly, this time around it was all Sansa who was revved up about fighting back, and Jon who was a little unwilling to dive right back into the action, after the losses he has suffered. This is a character development for Sansa of which I heartily approve of, by the way. However, after a threatening note from Ramsay that proves he has Rickon hostage, Jon agrees that they have no choice but to try to take back Winterfell.

But is it possible that Bran could go back in time and warn them never to leave in the first place? Would that even work? Some believe that Bran attempted to talk to Mad King Aerys, and the miscommunication between worlds is what drove him mad in the first place. Others think Bran's abilities could bring back Ned Stark. Too good to be true? Maybe, but who knows what the writers of this show have in store for us.