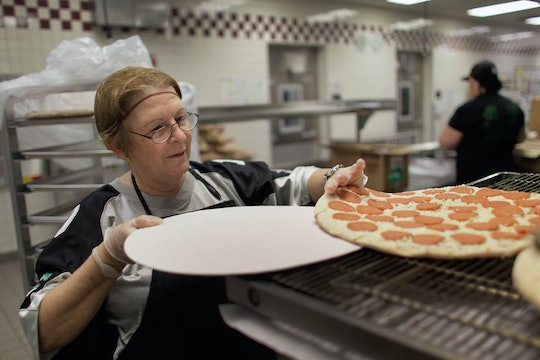 With government budget cuts and a high cost of living, among other things, making it a more complicated world than ever to raise kids in, it's natural for people to take notice when it seems like something is happening to make things particularly difficult. And since this school district hired a collections agency to handle overdue school lunch bills, people have certainly had a lot to say about it.

The brouhaha started, according to USA Today, with a recent letter sent home to parents whose children attend Cranston Public Schools in Cranston, Rhode Island. The letter, from Raymond Votto Jr., the district's chief operating officer, noted that the district has tried, without success, to collect money owed to the school lunch program over time.

The district's solution? Hire the Transworld Systems collection agency to recover the money that the district hasn't been able to collect itself, according to USA Today. It's important to note, however, that the Cranston School District has assured the public that children whose parents owe for multiple meals won’t be denied food. So at least that's something.

Romper reached out to Cranston Public Schools, but the district did not respond.

Still, the news struck many observers as emblematic of the problems facing today's hard-hit families. As INSIDER noted, 43 percent of Cranston students are eligible for free or reduced lunch.

“Yeah, $45,000 is a lot of money for the school district to not have, but then on the other hand I know what it’s like not to have enough money," local resident Lois Clemens, whose grandson attends school in Cranston, told NBC 10.

As USA Today added, lunch at a public elementary school in Cranston costs $2.50 per day. For middle and high school students, the fee is $3.25. Votto added that parents who owe $20 or more and haven’t paid the balance in 60 days will be the ones referred to the collections agency.

In the past, the district offered students whose parents owed money an alternative meal, but that policy was discontinued when it came out that parents still didn't pay the overdue bills, according to NBC 10.

On social media, though, some wondered whether the Rhode Island school officials in question might come up with an answer that wouldn't involve parent-shaming. As USA Today added, New Mexico created a student bill of rights, under which schools have to work with parents in order to recover money owed or else sign up for federal meal assistance.

And as INSIDER noted, this isn't the first time such an issue has arisen. An Ohio school district sent $900,000 in lunch-money debt to a collections agency in 2012, as HuffPost reported. School lunches have also long been in the news, either for what they cost, or what kinds of foods should be served, with the New York Times reporting that the Trump Administration is changing Obama-era rules related to the health of menu choices.

It seems to me that until we, as a society, have a greater sense that children's health, education, and welfare are more of a common good than an individual responsibility, people will continue to have to have these sorts of debates.

More Like This
David Harbour Transforms Into A Santa No Kid Wants To See In 'Violent Night'
20 Of The Best Christmas Movies For Kids
30 Great Non-Toy Gift Ideas For Kids
Rules, Printables & Tips For Making Elf On The Shelf Magic