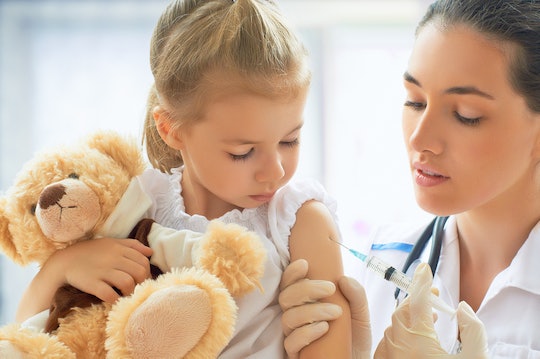 This School Is Reportedly Changing Its Vaccine Policy Amid Measles Outbreaks

After a series of highly-publicized measles outbreaks within Orthodox communities on the East Coast and Israel, one Cleveland-area Jewish private school is reportedly changing its vaccine policy amid outbreaks. According the Cleveland Jewish News, Hebrew Academy of Cleveland in Cleveland Heights, Ohio send a letter to parents on Nov. 15 to inform them of a big change in its vaccine policy.

Effective immediately, the school asked that all students enrolled be fully vaccinated. “After consultation with experts in the field, the Academy has modified its policy regarding vaccination,” the letter, signed by the school’s educational director, Rabbi Simcha Dessler and school president Dr. Louis Malcmacher, reportedly said.

The Hebrew Academy of Cleveland did not respond to Romper's request for comment.

“This is particularly important, as there are students in our school for whom it is medically unsafe to be vaccinated. Consequently, it is crucial that we ensure maximum vaccination rates across our student body.”

The policy change comes on the heels of measles outbreaks in ultra-Orthodox Jewish communities in Israel and in several East Coast cities, as reported by Religion News Service. According to the website, "dozens" of people have gotten the virus in New York and New Jersey, and over 1,400 people — mostly ultra-Orthodox — have gotten sick in Israel.

RNS added that some extreme Orthodox sects "do not recognize government authority or always comply with state-mandated health regulations."

But at Hebrew Academy of Cleveland, the recent outbreaks both in the United States and around the world will now mean that the only vaccination exemptions made for students at the school will be in the case of "children whose physician certifies in writing that immunization against a disease is medically contraindicated and the reason for it is not required to be immunized against that disease," according to the wording of the letter reported by Cleveland Jewish News.

Students with a medical exemption who are not fully vaccinated, however, will have to stay home from school if an outbreak occurs within the school community. “We recognize that there are families that have strong views on both sides of this issue,” the letter said. “However, this is not an area where we can accommodate any deviation from this new protocol.”

School director Dessler told the Cleveland Jewish News that between Cleveland being fairly close to the East Coast and possible travel between various Jewish communities, the school’s leaders decided to make the policy change. Parents at the school have reportedly been supportive. Dessler said parents have “overwhelmingly expressed their satisfaction” with the decision, according to the paper.

Hebrew Academy of Cleveland parent Dr. Baruch Fertel, an emergency room physician at the Cleveland Clinic, told the newspaper that, in his opinion, the policy was “a wonderful, proactive step." According to an NBC affiliate, Fertel told WTOL-TV that he thinks parents are opting to not vaccinate due to the opinions of celebrities and others rather than religious beliefs.

While it's scary to hear about devastating tragedies, such as measles outbreaks and other serious diseases affecting a group of children, this school is taking the steps it deems necessary to ensure a better outcome for its young learners, and for the outside community.