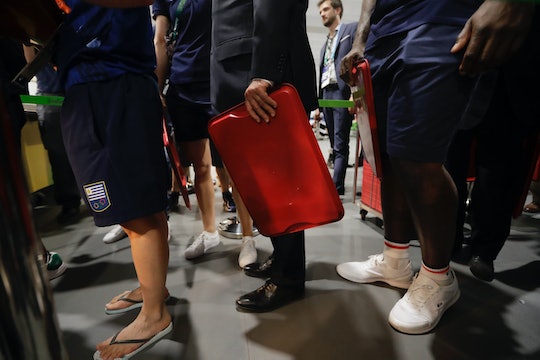 This School Lunch Photo Has Sparked An Important Discussion

School cafeterias aren't exactly known for their wide array of delicious food, but a recent school lunch photo featuring chicken nuggets in a hot dog bun is raising some important conversation around what's being offered to kids in education facilities nationwide. The photo comes from Hempfield Area High School in Pennsylvania where a student snapped a picture of his friend's tray with the "sandwich" and an apple. Social media immediately pounced, questioning the contents of the photo and the seeming lack of attempt to make the meal look interesting or appealing to students. (As some noted, there was no lettuce, tomato, or any sign of a condiment on the hot dog bun.)

More Like This
Thank The Moon For Your Free Taco
12 Beautiful Strawberry Recipes
These Are The Best Online Meats & Charcuterie You Can Get For Father's Day
Are You Breastfeeding & Also *Starving* At Night?

Update: In a statement to Romper, a Hempfield Area High School spokesperson explained that the photo the student in question had posted was misleading. "On Wednesday, March 22, Hempfield Area Senior High School Cafeteria offered a new recipe of the month, Popcorn Chicken Po-Boy Sandwich. The sandwich comes with homemade Remoulade Sauce, Lettuce and/or Tomato," the spokesperson wrote. "

They continued, "The meal also includes a choice of 2 fruits, 2 vegetables, and milk. A student at the High School chose to have his Po-Boy sandwich plain, just the popcorn chicken on a bun. He declined any offered topping or other lunch components. The District is an 'Offer vs Serve' district under the National School Lunch Program, allowing the students to choose how they want their meal. It is important to note that the popcorn chicken meets the National School Lunch Guidelines. The breading is whole grain and they are not deep fried." The spokesperson added that students are regularly offered "a variety of salads, specialty and traditional pizza, a full-service deli bar, and from the grill a choice of hamburgers and chicken sandwich specialties." A photo of the actual March 22 lunch offering can be found below.

The sandwich was reportedly sold to the student for $2.75, according to users with knowledge of the situation on Reddit, where the picture was originally posted. Once users got over whatever humor they found in the image and realized that it was an actual meal being served up to a group of public high school students in the United States, they became a bit more stoic about the whole incident. Romper has reached out to Hempfield Area High School for comment and is awaiting a response.

The photo has since sparked a deeper conversation about the state of school nutrition guidelines and offerings; If this is what schools are serving children while there are nutrition guidelines in place, for example, what will happen if bills like H.R. 610 are passed and Congress repeals the Healthy, Hunger-Free Kids Act, which guarantees kids more fruits, veggies, and whole grains at lunch? More nugget sammies?

In a very confusing move, the GOP added language to H.R. 610, known as the Choices in Education Act of 2017, which lays out a plan to fund a school voucher program that would repeal the Healthy, Hunger Free Kids Act. It's weird to want to take away regulations from the Department of Agriculture that ensure children are getting a well balanced and nutritious meal in the middle of the day, but this is 2017 and that's apparently something that happens now.

This isn't a novel idea, either. Iowa Rep. Stephen King has been leading the charge to repeal the nutrition regulations for ages, upset that the portions of meat and carbs are smaller, which is clearly not the case. (Seriously — look at that hot dog bun full of fried meat. There's nothing green about it, Steve.) In the school's defense, many school districts must outsource meal planning and cooking in the cafeteria and it's those third parties that should be held to some standards other than making a profit from serving a cheap lunch. But the problem is a complex one that will take a lot of hands and heads to solve.

Obviously, no one is judging anyone for eating carbs or chicken nuggets for lunch. Chicken nuggets are delicious, and with a little TLC, that sandwich could theoretically be turned into something more interesting and delicious-looking. But serving children a hot dog bun with a handful of chicken nuggets in it probably won't help them succeed throughout the rest of the day as much as a more balanced, healthy meal would.

Aside from just being healthy, school meals should also be a way to ensure that kids are introduced to interesting food so that they can make better dietary choices out in the real world. And for some kids, school lunches are the only meal they get all day. What if your only meal was a hot dog bun with plain chicken nuggets? You'd likely be hungry and not all that great at focusing in math class later on.

Hopefully the powers that be will see that nutrition guidelines protect children from having to eat cheap, nutrient-free food. And maybe the Congress should try the nugget-hot dog bun special before they vote on H.R. 610, just for good measure.