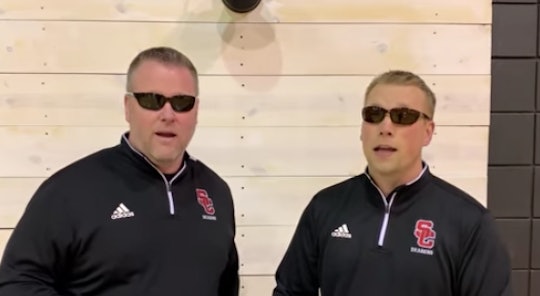 Snow days are generally common enough, but with freezing cold weather sweeping the nation, and kids and even some adults housebound due to the elements, a little extra humor — and even free entertainment — is always appreciated. This school's viral snow day announcement will have you tapping your feet, and no doubt the kids were happy with the news, too.

More Like This
This First-Grader Convinced An Educational App To Add Black Hairstyles To Avatars
Here Are 25 Shows You Can Feel Good About Your 2-Year-Old Watching
Police Are Investigating A Florida School Principal Who Paddled A Student
18 Best Sand Toys In 2021 For Babies, Toddlers, & Kids

As PopSugar reported, when the Swartz Creek Community Schools district in Michigan decided it was necessary to call everything off for the day due to snow (and cold), administrators didn't just decide to send an e-mail, or one of those annoying robocalls a lot of schools employ.

No, this school system wanted to deliver the news... musically. As PopSugar noted, superintendent Ben Mainka and high school principal Jim Kitchen of Swartz Creek — which the ABC News 12 website indicated is a suburb of Flint, Michigan — went on camera to address students and parents.

"I know that one of the things that's been happening — which is an epidemic across our country — is that superintendents and other administrators are coming up with ridiculous songs," Mainka said. "And they're playing music and putting on sunglasses on and making absolute fools of themselves trying to cancel school for a snow day."

After a bit, Mainka and Kitchen put on their own shades to strike up a tune... but not just any tune. As they dove into a personalized version of Leonard Cohen's "Hallelujah," with their own lyrics inserted about kids missing school due to weather, it also became apparent that the two educators can actually sing.

"It goes like the this when the snow hits/The busses can't get out of it/It's cold and it's a snowy winter morning," they croon. Not bad. The video has gone viral, with more than 253,000 views. Folks on Twitter liked Mainka and Kitchen's methods of breaking school news, with many users noting the educators can really carry a tune: "Great voices," noted one fan.

As the Weather Channel noted last November, this winter had one of the snowiest and coldest starts on record, with 74 cities across the country, spanning New England to the Rockies, experiencing extreme seasonal cold and snow as of late November, 2018. The past few years have seen a rash of such fun-filled, snow-day announcements from schools across the country.

But before you get too excited about schools getting a lot more fun and maybe a little less strictly academic, what with all the snow-days musicals and all, keep in mind that the whole "Snow Day" concept may melt away as fast as Olaf on a sunny beach.

CNN reported that with more school-day cancellations occurring due to weather, many schools are looking to make up missed days, often with technology. Virtual learning days, in which students log in from home to fulfill curriculum goals even if no one can get on the road to get to an actual schoolhouse are being discussed as a solution across the country, the outlet explained.

So the moral of the story is to enjoy your weather-induced days off now, kids. Happy screen time!