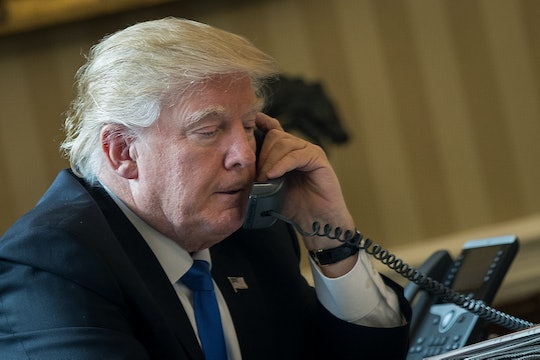 Call Your Rep About Trump's Budget With This Script

There's been a lot of talk about President Donald Trump's preliminary 2018 budget plan, which proposes billions of dollars in cuts to spending for many government agencies and large increases in military and homeland security spending. And a lot of people are looking for a script for calling their reps about Trump's budget that will make the task of making that call much less stressful. Fear not, because the script included below is super simple.

Some big "losers" (one of Trump's favorite terms to use on Twitter) in the budget plan include the Environmental Protection Agency, Agriculture, Labor, Health and Human Services, and Education, among others. Veterans Affairs gets a slight increase in funds, and Defense is getting a 10 percent positive change in discretionary spending.

The full text of Trump's budget blueprint can be found here, via NPR. You can check it out in its entirety on that link, or peruse the more specific proposals in the budget and what they could mean on another article provided by the same outlet. According to that in-depth NPR piece, the plan, "includes slashing spending on foreign aid and the environment, as well as long-standing programs aimed at boosting the arts and humanities, as well as the fortunes of the most vulnerable Americans."

If you have concerns about the proposed budget — and many do, including some Republican politicians — you might be interested in calling your representatives and telling them to oppose the plan.

But what if you get super stressed out by making phone calls? It can be a little intimidating to think about making such an important call, even if you remember that the person on the other end of the line is likely an intern or other lower-level staff member who's just as stressed as you, or if you consider the fact that you might just end up leaving a voicemail anyway and never even have to talk to a real human about your concerns.

Many sites, including The 65, a grassroots political mobilization group, and 5 Calls, a volunteer group dedicated to helping "regular people" to have a voice in government, have put together scripts to help make your phone calls to your representatives a little easier to get through. It's like you're doing a group project, and someone else has already done a bunch of the work for you!

Below is another sample script for you to play off of. So there's a ton of options to take the pressure off when you make that vital phone call.

Just make sure you actually say your name and plug in the other info where listed — not to make you more nervous, but it might sound a little silly to the person taking your call if you literally say, "Hi, my name is My Name." No pressure, though. Maybe practice on your toddler or cat first. It doesn't hurt to do a trial run — no judgment.

Hi, my name is [NAME], and I'm a constituent calling from [CITY, ZIP] to check in with [SENATOR OR REPRESENTATIVE'S NAME] about Trump's proposed budget cuts. I'm particularly concerned about [YOUR ISSUE OF CHOICE HERE - could be cuts to the National Endowment for the Arts, National Endowment for the Humanities, the Corporation for Public Broadcasting, the EPA, etc]. I want my lawmakers to publicly take a stand against these proposed budget cuts. Please pass my concerns along to [SENATOR OR REPRESENTATIVE'S NAME] and follow up with me at [GIVE CONTACT INFO OF CHOICE (PHONE, EMAIL) HERE]. Thank you for taking my call, I appreciate your time today.

Additionally - IF LEAVING A VOICEMAIL: leave your full street address to ensure your call is tallied. Some representatives might not take your comments into account if they think you might be calling from outside their district.

And that's it! Easy, right? All you really need to do beforehand is make sure you know which issue you want to speak about, and make sure they get your information to record. Simple.

Congress is up against an April 28 deadline on the budget for fiscal-year 2017 if it wants to avoid a federal government shutdown. So you should get those calls in soon. If you don't already have them on speed dial, find your representatives here.