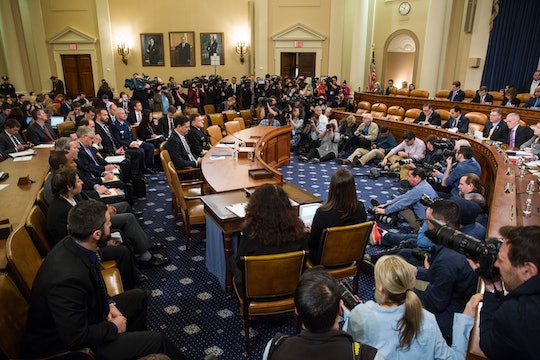 This Script Helps You Call Your Rep About WIC

In order to increase defense spending by $54 billion and build that infamous wall, President Donald Trump's 2018 budget proposal includes severe cuts to dozens of agencies and programs, and voters are furious. Having a script for calling your rep about WIC or other programs you support is an easy way to get your point across. Trump wants to cut $200 million from the Special Supplemental Nutrition Program for Women, Infants, and Children, also known as WIC, which helps nutritionally at-risk low-income women, infants, and kids under 5 by providing food, nutritional education, breastfeeding support, health screenings, and referrals for health care and other social services.

But luckily, nothing is final just yet. Negotiations on the budget are likely in the months ahead, according to the Los Angeles Times, and Congress is surely expecting a flurry of calls, letters, and emails, given the public uproar surrounding the original version. By now, you may have heard that the best way to contact Congress is by phone; electronic communications can be easily ignored, and letters can pile up so that yours isn't seen until it's too late. Now there's just a matter of the right thing to say.

In an email interview with Romper, a National WIC Association representative who asked not to be named shared that WIC has historically enjoyed broad bi-partisan support, and voters overwhelmingly oppose cutting funding for the program, so you're off to a good start. You should contact your rep whether they currently support WIC or not; if they don't, you can convince them, and if they do, it's good to keep the program at the forefront of their thoughts.

According to the Atlantic, one key obstacle to changing opinions on the other side of the aisle is not appealing to the right values. Liberals tend to value kindness and fairness, while conservatives value loyalty and patriotism. So while a Democrat could be swayed by the fact that 53 percent of all infants born in the U.S. depend on WIC, and might go hungry without it, a Republican might be better convinced if you tell them many military families depend on WIC.

And one thing everyone can agree on is saving money. "WIC adds value and provides a solid return on investment," the WIC representative explains to Romper. Not only does it reduce healthcare costs by keeping both mothers and children healthy, it reduces the number of low birth weight babies. According to the WIC representative, "For very low birth-weight babies, a shift of one pound at birth saves approximately $28,000 in first year medical costs." And WIC spends its money wisely, using only 6 to 9 percent of its total funding on administrative costs. Cutting funding could lead to staff cuts, clinics reducing hours, or even closing completely, which would lead to waiting lists for clients. This wouldn't be unprecedented; according to the Guardian, WIC budget cuts in 2013 led to office closings. WIC is not guaranteed, and only 83 percent of eligible infants received assistance that year because that is the percent of eligible infants whose parents applied.

Here's how to prevent that from happening again. First, find your representative's name and phone number. Then, give them a call and and identify yourself as a registered voter (you are registered, right?) and tell them your ZIP code. Then say:

I'm calling to voice my concern over the proposed budget cut to WIC. WIC serves 7.3 million mothers and young children every month, many from military families. It has a proven track record of fiscal responsibility, and it saves taxpayers billions by reducing health care costs. I urge you to reject any budget proposal that doesn't fully fund and support this program.

That's it! If you want to do more, consider reaching out to friends and family in other areas and asking them to follow suit. If kids going hungry isn't enough to convince a politician to fund WIC, perhaps the threat of not getting reelected will.