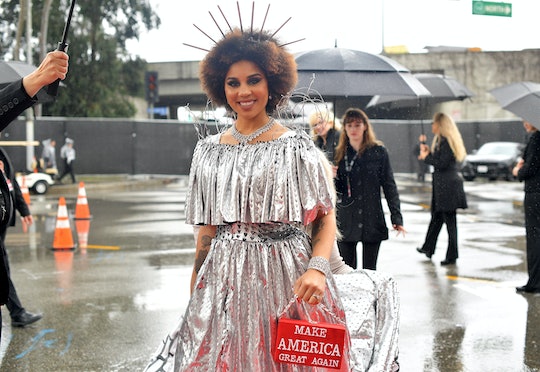 Joy Villa Wore A "Build The Wall" Dress At The Grammy's & That's ... One Way To Get Noticed

There were a lot of bold outfit choices on the red carpet during the 2019 Grammy Awards. But no one was more bold in their outfit choice than conservative singer Joy Villa who showed up in an outfit that made a very strong statement. People on Twitter are understandably upset with this singer's "Build The Wall" dress at the Grammys for obvious reasons. This isn't the kind of statement that people want to see during such an important night.

On Sunday night, Villa took to the red carpet, where she showed up wearing a silver colored dress with barbed wire attached to it and a red purse with the statement "Make American Great Again" on it, according to Cosmopolitan. It was clear, by looking at this dress, that Villa was dressed up as a "wall" — like the southern border wall that President Trump shutdown the government for in order to obtain funding for, according to Fortune.

But this wasn't a big enough statement for Villa, who shed her silver dress to reveal a "brick" dress underneath with the words "build the wall" written on it. If Villa wanted to upset people or get them talking, then her dress definitely did the trick.

People on Twitter weren't impressed by the statement and wanted the singer to leave the red carpet ASAP.

But, as one Twitter user smartly pointed out, her dress did exactly what she wanted it to do — it got people to talk about her.

As that same user pointed out, this isn't the first time that Villa has made such a statement. In 2017 and 2018, Villa took to the red carpet at both Grammy Awards wearing equally as controversial dresses. In 2017, Villa got everyone talking when she wore a navy blue dress with Trump's campaign slogan "Make America Great Again" written on it in silver, according to Entertainment Weekly.

And last year, Villa made headlines again for her white dress with a hand painted fetus on it and a clutch with the phrase "Choose Life" on it. Needless to say, Villa knows how to get people talking year after year. And she told Variety this year that this is exactly what she was intending on doing. Villa said:

This is what I believe in. I believe in the president, I just released an album called Home Sweet Home, and it's all about my love for America, barbed wire, I'm having fun with it.

Having the power to express yourself is awesome, and there really isn't a better place to do it than on the red carpet. But, since this red carpet is such a powerful platform, one would hope that celebrities would make less polarizing statements than the ones that Villa has continued to make. This is a place where everyone should come together for their love of music, instead of being divided because of their political opinion.

But, this might be the first time that many people are hearing about Villa, especially since her music isn't played on most popular radio stations. So, it's natural for people to be wondering — who is Joy Villa? Villa is a conservative singer, according to Entertainment Weekly, but is most known for her bold outfit choices.

While Villa might have had "fun" with her outfit to the Grammys this year, some people watching at home definitely found it to be anything but.