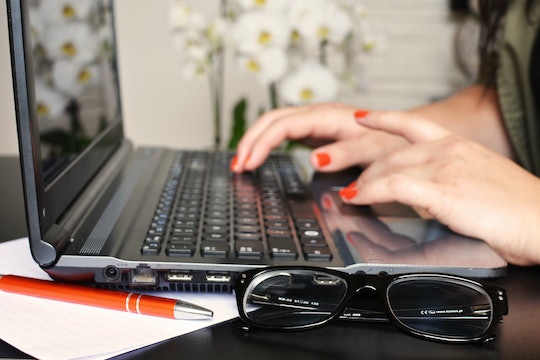 For many women, it's a tough choice to decide whether or not to return to work after having a child. But sometimes, that choice is made for them; breaking back into the workforce after a gap in one's resume can be challenging, and working moms see, on average, a four percent decrease in pay for every child they've had. Now, a new website is helping moms fight the "motherhood penalty" and get back to work after taking a break to raise children.

According to The Cut, one of the biggest challenges facing women who have temporarily stepped back from their careers is that they no longer have a professional network to help them get their foot in the door, which is where Après, which launches May 4, comes in. The Après job site is "a marketplace for both full- and part-time positions, consulting projects, maternity fill-in positions, and pro-bono opportunities across a wide range of industries." It's free for job-seekers to join and search jobs, and premium members can pay $250 per yea (or $25 per month, three months minimum) to have a searchable portfolio. Fast Company reported that several thousand users have already signed up for Après, which will also offer access to "editorial content, career coaches, and industry experts" to assist women in their search for employment.

So why should employers choose Après when searching for candidates? According to the site, in addition to increasing gender diversity in the workplace, employers will "retain rising women by having more female mentors and role models," and "[w]omen returning to work are supremely loyal, focused, efficient, and reenergized about their careers." Employers are charged on a sliding scale based on the size of the company, and the annual fee allows them to search the member database, post unlimited jobs, and host a corporate profile on Après for one year.

The site's founder, Jennifer Gefsky, told Fast Company that she got the idea for Après after attempting to resume her career as a lawyer following an eight year break to raise her two children: "In the eyes of corporate America, this highly capable lawyer with 12 years of legal experience, who worked on incredibly complicated matters for MLB, was perfect for... an entry-level job?" According to a Center for Talent Innovation survey, 75 percent of women who left their careers did so to take care of children, and almost 90 percent want to return to the workforce. While those surveyed only stepped back for an average of less than three years, just 40 percent were able to find full-time work. Now, Après is poised to help that other 60 percent.