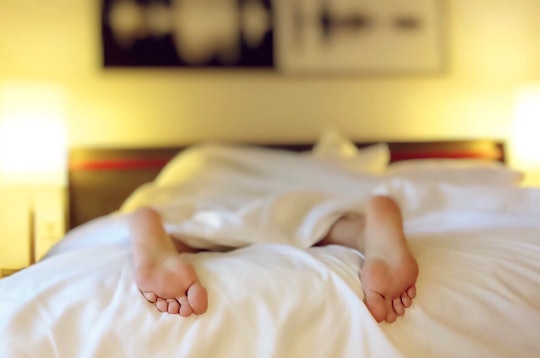 Now You Can Calculate Exactly How Much Sleep You Lose To Your Kids... Yay?

If you're a parent, chances are you're pretty familiar with a few things — mainly coffee, power naps, and oh, you know, exhaustion in general. Raising tiny humans takes a lot of time and effort, and most moms and dads end up dipping into their precious shut-eye every night in order to get things done. Wondering just how much sleep you've lost to your little ones, though? Now, you can find out: this sleep calculator lets parents see how much sleep they've lost in the interest of raising a family. Be warned: it's a lot.

Hillarys, a home furnishing band based in the United Kingdom, recently launched the sleep calculator for curious moms and dads, and the results are rather astounding. To use it, all you have to do is plug in your kid's age (you can easily add multiple children, as well), and the web-based calculator lets you know how much sleep you've lost in that time. The calculator also dispenses other fun facts, such as how many diapers you've changed during your kid's life, how many bedtime stories you've read, and how that lack of sleep is affecting your behavior (raise your hand if you've ever put your cell phone in the fridge).

Wondering what the damage looks like? To give you an idea, a mom with a 2-year-old kid has already lost about four months of sleep and sung nearly 3,000 lullabies since her child was born. (I don't even want to mention the number of diapers she's changed, but it's definitely over 5,000). And those numbers start stacking up early on in a kid's life: one Australian study found that new moms regularly miss out on up to nine hours of sleep a week, according to HuffPost.

"Some parents are fortunate enough to have a child that sleeps straight through – it’s the dream for all parents – but for many this just isn’t the case," Tanya Irons, a spokesperson for Hillarys, said in a press release. "Whether you think you’re losing a little or a lot of sleep, this tool is a great way to find out just how much. No matter whether you’ve lost months or years of sleep though, I’m sure everyone will agree that they are worth it."

If you're one of those moms who's currently missing out on valuable sleep time, there are ways to get a bit more shut-eye in. Make sure you and your partner are splitting nighttime and early morning duties fairly, lean on family and friends who are willing to babysit, and stick to a schedule that works for you. If you can nap, do it — and if you can't, at least try to rest when you can.

After that? Make sure you use the sleep calculator and write down how much sleep you've lost to your kid over the years — I hear that a good guilt trip is the perfect graduation gift for when your child flies the nest.