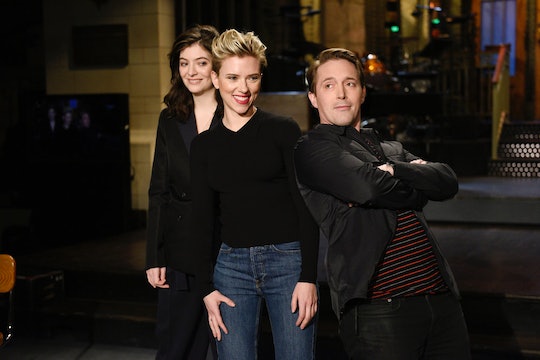 The 'SNL' Cherry Grove Sketch Is A Must Watch

On this week's episode of Saturday Night Live, one of their fake commercials totally nailed the difference between how the media portrays gay men and lesbians in totally different ways. The SNL "Cherry Grove" skit will make you rethink LGBTQ representation in a major way. It begins as a pretty convincing portrayal of a commercial for a new show on Logo about a group of men on Fire Island, which is known as a popular getaway for the LGBTQ community.

With clips of men going wild, taking shots, and having the time of their lives, the commercial is so convincing that viewers couldn't be blamed for thinking it might actually be a real commercial. Then reality sets in as the commercial advertises a sister show called Cherry Grove (which is actually a beach on the IRL Fire Island), where "affluent lesbians," played by Aidy Bryan, Kate McCinnon, Cecily Strong, and Sasha Zamata, share a summer house together.

The difference? The women are all "crunchy" granola mothers where the most exciting thing that happens is when one mother asks the others to keep it down so they don't wake the "dairy fed miracles" (the breastfed children) upstairs. At one point, there's a fight over lost water socks. While the men party all night, the women play board games, cuddle, and talk about their feelings.

"Watch these ladies LOSE IT," is the tagline. The reality TV commercials were spot on with their stereotyping of a certain "type" of "affluent lesbian," but it also betrayed how differently the media portrays the LGBTQ community overall. The women of Cherry Grove all played into the mainstream tropes like lesbians being environmental activists who only listen to the Indigo Girls, love their cats, and only wear walking shorts, men's shirts, and fleece vests.

But all the generalizing and stereotyping didn't mean that many people watching Saturday Night Live weren't totally enjoying it. The sketch was a hit with viewers on Twitter who were all very ready to watch a full season of Cherry Grove.

One viewer wrote, "I wanted to be offended by the Cherry Grove skit but as a lesbian...I gotta admit it's totally accurate and completely hilarious." Things are only funny when they're true, right? Others, LGBTQ or not, were into it as well.

To be honest, we would totally watch an entire season of both Fire Island and Cherry Grove right now, too, but then again, we watch all the reality TV we can get anyway.