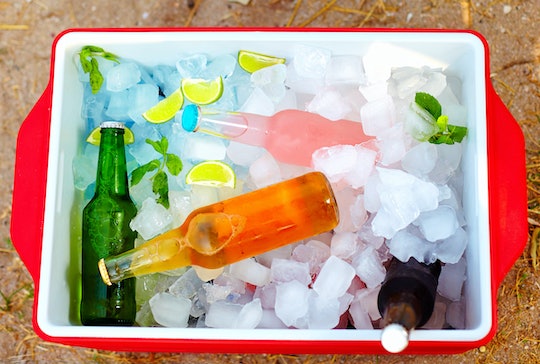 "Who's going to carry the cooler?" This question has led to full on brawls on my family vacations, as my cousins and I argue why we shouldn't have to lug the heavy bucket down to the beach. (The fight about who should get replacement ice is even worse.) But GoSun's new Solar-Powered Cooler could neutralize all cooler-related conflicts, as it doesn't need heavy, melting, sometimes-hard-to-source ice to keep all your snacks and refreshments cold.

Coolers are a beach necessity, especially when you have kids, as on-demand snacks are one of the keys to keeping the whole fam happy as you soak up the sun. But even the best models can't keep the required ice from melting and causing a mess at some point, nor can it stop it from being even more burdensome to carry as a result of the excess water weight. That's where GoSun's "Chill" comes in — it's an ingenious cooler that uses solar power to keep its contents cold.

The Chill looks like a typical cooler on wheels, but instead of being designed with solely insulation in mind, it uses brushless compressor motors and lithium ion batteries to keep things cold or even frozen. The Chill can be powered by the rechargeable battery the portable solar panel directly, so even if you forget to the charge the cooler in advance, the sun itself will help keep things cool while you're outdoors.

This isn't GoSun's first venture into the daily applications for solar technology though. They also sell solar-powered grills and ovens, with their mission being to reduce environmental issues caused by everyday human activities. Their products are designed to be environmentally-friendly without forcing you to sacrifice any functionality in the process. For instance, the Chill is similar in size to other coolers you'll see on the market, measuring at about 40 liters (10.5 gallons) per a company press release, but it can hold up to 40 percent more food and drink for a similar-sized cooler since ice won't take up valuable space. Think of it like a portable fridge, since it can maintain a constant temperature.

Plus, it offers other technological benefits as well. The Chill comes with a detachable Powerbank that can be used to charge electronic devices, so you don't have to worry about your phone or speaker battery running out during your beach day. A cooler and a charing port in one? Sign me up.

With all that functionality, the Chill is a bit on the pricier side. It's available for preorder on Indiegogo at $479, but think of all the ice you won't be chasing and buying as well as the peace of mind — and the longer you use it for, the more money you'll end up saving, especially if you spend a lot of time outdoors. Models will start arriving in August if your order now, just in time for your last stretch of summer. Looks like my family will have to find something else to bicker about this year.