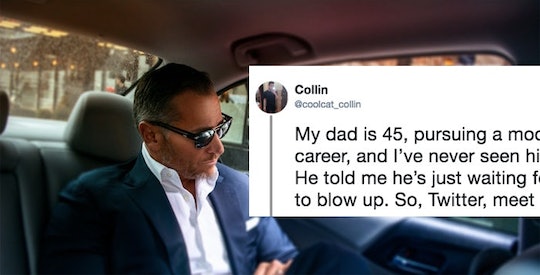 The latest viral meme came to be after this son shared photos of his aspiring model dad to Twitter. The amazing pics show the dad in various dapper poses, and he has since earned the nickname of "hot model dad." And once you catch a glimpse of this smoldering photo shoot, you'll understand why the internet can't get enough of this viral sensation.

It's not uncommon for parents to go after their long held dreams later in life, especially when their kids are older in age and they're less bogged down with day-to-day responsibilities. This seems to be the case for Clint Hayslett, a 45-year-old dad and aspiring model from Toledo, Ohio. "Family man and aspiring model Just following the dream!" his sweet and earnest Instagram bio reads.

Although Clint has put 100 percent into his modeling goal, his son, college student Collin Hayslett, thought he could use a little boost in the marketing department. And like any good millennial would do, he took to Twitter to spread the word.

"My dad is 45, pursuing a modeling career, and I’ve never seen him happier," Collin wrote on March 28. "He told me he’s just waiting for a chance to blow up. So, Twitter, meet my dad."

The dashing photos were snapped by photographer Joshua Coleman for Donahue Eyewear, an endeavor the elder Hayslett did for free, according to TIME. Everyone has to start somewhere, right?

Since Collin shared the pics, his dad has received an outpouring of support. The initial tweet has over 375,000 likes as of Tuesday, and Clint's modeling debut is all over the internet.

“I’m wiped out. I’m worn out," he told TIME of his newfound fame. "I’ve never held my phone for so many hours. It’s very humbling and inspiring."

Clint had no idea Collin had planned to tweet the photos out, so he was happily surprised when he learned of his internet popularity. Collin recalled to New York Magazine:

He came home that day and I was like, 'Well, you’re blowing up.' He was kinda going nuts. It hilarious. He’s on his phone now more than ever. Now when I come home he asks me for the stats on the tweet. We are slowly integrating social media into his life. He didn’t have an Instagram or Twitter before three days ago. He’s taking it as a positive, inspirational thing. Like I said, he used to be a pastor. He’s really humbled by the respect everybody has given him. He’s speechless.

In a sweet twist, all of the publicity has paid off.

"**DAD UPDATE** In the works of having my dad’s own signature pair of sunglasses, has a photo shoot lined up this week, and he will be visiting Chicago soon!" Collin tweeted on March 31. "This is more publicity than we could’ve dreamed. Thanks for the love and support! #twitterdad."

Ugh, my heart. There's nothing more satisfying than watching someone live out there dream, especially when they're an earnest dad like Hayslett.

But arguably the best part of this story has to be the internet's reaction to Collin's tweet. The message has inspired the "dad pursuing modeling meme," which features everyday dads replicating Clint's sexy photos.

Lin-Manuel Miranda even got in the fun, tweeting out adorable shots of his 64-year-old dad on April Fools' Day.

"My dad is 64, pursuing a modeling career, and I’ve never seen him happier," he wrote. "He told me he’s just waiting for a chance to blow up. So, Twitter, meet my dad."

Others shared photos of celebrities instead of their own dads, like this tweet featuring actor John Stamos.

One commenter joked that their dad is "finally pursuing his dream of modeling after years of managing ungrateful kids," which is awesome.

What's not to love about this new meme? Not only is it hilarious, but it originated from a heartwarming place — a son's love for his dad. Good luck in the modeling biz, Mr. Hayslett.