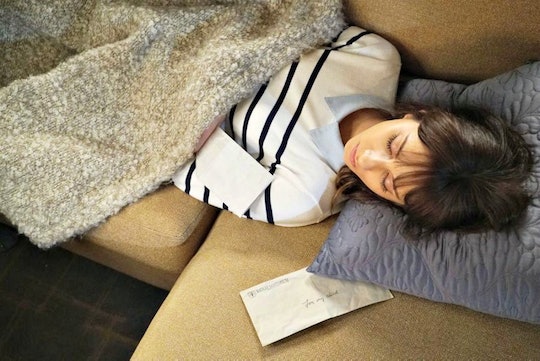 This Spencer Twin Theory Will Make You Rethink Everything

One of most absurd, yet oddly plausible, theories about A.D. is that Spencer has a twin on Pretty Little Liars. And there was some new evidence to support the Spencer twin theory during last Tuesday's episode, "Hold Your Piece." Do you recall that scene where Spencer and Marco were playing ping pong? Well, a super fan came up with a very astute Spencer twin theory that could quite possibly make you rethink pretty much everything you thought you knew about this show.

Reddit user CaitlinDiLaurentis noticed that to make the winning shot in the game, Spencer switched to her left hand to win. We all know how intense Spencer is — there is no way that she would switch from her dominant right hand to her left hand to win the game, right? The theory states that this was a glimpse of the twin Spencer allegedly has, who has been orchestrating this whole, twisted game. Other fans have noted that Spencer has been wearing her watch on her left hand ever since the time jump forward. Which also, according to these fans, proves that Spencer isn't who she says she is.

This means that during the whole Caleb romance and sometime before they came back to Rosewood, Spencer has been replaced by her twin — kind of like how Petra's twin took over her identity in Jane the Virgin. But then where's Spencer? The theory is sort of plausible.

Viewers know that Mary Drake is Spencer's mother and twins do run in the family (remember, Mary and Jessica DiLaurentis are twins, too). And let's not forget that Dr. Cochran told Spencer and Aria that he delivered "both" of Mary Drake's babies. Although everyone assumed that this meant Spencer and Charlotte, maybe it was Spencer and another baby — aka her TWIN.

This theory gets even more in depth when you consider that Bethany Young might be the twin. Everyone keeps hearing a lot about her and viewers have never seen her in person. Once upon a time, Mary told Spencer that the Hastings and the DiLaurentis' had a "lot in common." It could be that the similarity is that both families put a child in Radley, which would explain the dream sequence.

Remember that super creepy dream Spencer had in Season 6 with the girl dancing around an abandoned Radley? It's possible that deep in her subconscious, Spencer knows she has a twin and was dreaming of her as a young girl.

Once upon a time, Tyler Blackburn said in an interview that viewers have "kind of met" A.D. In the dance scene? As "Spencer?" It could be. Then again, the cast will say anything. Like remember when Keegan Allen swore up and down that Toby died in the car crash?

However, there are some flaws in this theory. Like where is the real Spencer then? Or are there just certain scenes when "Spencer" is alone that it's her twin? In addition to that, if it's Spencer's twin orchestrating all of this, then she knows all about her past, which means she wouldn't be so surprised or upset about learning Mary Drake was her mom (unless she's just that good and going all in). She wouldn't have been sad when Caleb moved out (remember the whole falling on the bed thing and crying alone?).

Although some fans think it was her twin acting when "Spencer" asked to kiss Toby at the end of last season (would Spencer really have asked Toby to cheat?), Spencer did seem to just know at the end of "Hold Onto Your Piece" that he was hurting because his wife died.

A twin wouldn't have been able to tell that. Only Toby's soulmate would. But in the world of Rosewood, I suppose anything is possible.