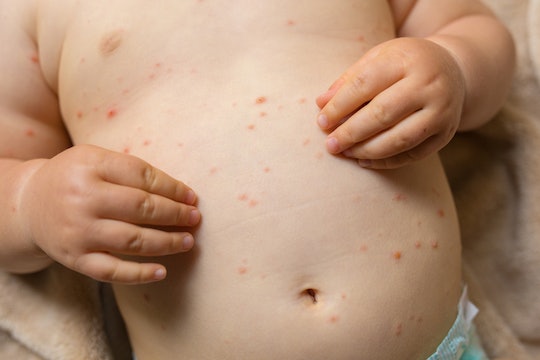 If you were born before the mid-90s, then chances are the chickenpox was a disease your parents simply had to hope you didn't get — and if you were one of the many children who did, then it usually meant spending your days itchy and miserable until it passed. That all changed though, once a vaccine for chickenpox became a regular part of childhood immunizations, and for most millennial parents, it now means our own children can be spared from contracting it. The only problem? Not everyone vaccinates, and it's now meant that this state is having its worst chickenpox outbreak in 20 years, according to The Washington Post.

North Carolina private school, Asheville Waldorf School, is currently experiencing a chickenpox outbreak that has grown to make it the largest outbreak of the disease in the state since the varicella vaccine was first introduced. As of Friday, 36 students in the nursery-sixth grade school have been confirmed as having the virus, according to The Asheville Citizen-Times, yet officials also don't think it's necessarily a random occurrence.

It's no secret that vaccination has become quite a controversial topic among American parents, and thanks to social media, it's become perhaps easier than ever for unsubstantiated claims about immunization to influence the decision parents make on their children's behalf — even when it goes against the advice of medical professionals. What's more though is that anti-vaxx sentiments seem to particularly flourish in certain communities.

A 2011 study published in Public Health Reports, for example, found that unvaccinated children in the United States were more likely to come from wealthy, highly-educated, white families, according to CNN. And since a highly-contagious vaccine-preventable illnesses can spread very easily among groups of unvaccinated children, it's perhaps not surprising that so many students have contracted the virus already.

In fact, similar types of outbreaks have already been seen throughout the country in recent years. Despite being technically considered eradicated thanks to the vaccine, measles has been making a comeback throughout the country, and in 2015, 159 people contracted the virus from an outbreak that was linked back to Disney World in California, according to The New York Times. Vaccine-preventable diseases also appear to be thriving in smaller ethnic communities, too: in 2015, Minnesota faced its worst measles outbreak in 30 years after 58 cases were reported, almost all of which occurred within the state's Somali-American population in or around Minneapolis, according to BMJ, where measles, mumps, and rubella (MMR) immunization rates hovered at only 42 percent in 2014.

Most recently, 85 members of the Orthodox Jewish community in New York City's Williamsburg and Borough Park, along with nearby Rockland County, were confirmed earlier this month as having the measles, according to Vox — all of which reportedly occurred among either unvaccinated or under-vaccinated people, most of whom were children.

While chickenpox may at least seem much less of a threat than the measles, particularly since it used to practically be a childhood rite of passage for many of us, the North Carolina outbreak may not seem to some as being all that alarming — and in fact, Asheville mom Amy Gordon told The Citizen-Times that while her own children were born before the vaccine was available, she'd "want to send [her] kid to the Waldorf School to get chickenpox" if she currently had an unvaccinated youngster.

She's certainly not the only one to think that way: in October, a group of parents in Colorado were reportedly organizing so-called "chickenpox parties" for their unvaccinated kids, according to USA TODAY, in order to encourage their children to develop immunity to the disease by contracting it directly. But with a highly-effective vaccine now available, experts are warning that underestimating the potential severity of chickenpox can be straight-up dangerous.

Although it's true that most children may emerge unscathed, the chickenpox vaccine now prevents more than 10,000 hospitalizations and between 100 to 150 deaths each year due to the disease, according to the Centers for Disease Control and Prevention. And even if your child might be totally fine, they'll still be putting others at risk: according to the CDC, chickenpox is particularly dangerous to infants, pregnant women, and those with compromised immune systems, like those undergoing cancer treatment.

In other words? Simply viewing your own childhood experience with chickenpox as proof that it's not that big of a deal is failing to take into consideration the very real risk that the virus poses. And given that it's easily preventable with a vaccine? It's hard to understand why anyone would choose to put their child — and other people's children — at risk.