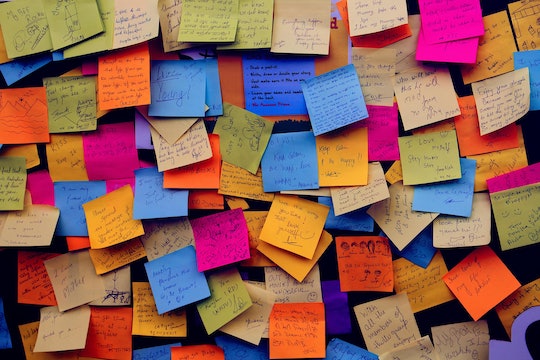 This Dad Leaves Hilarious Post-Its Around The House

When writer Chris Illuminati and his wife, Libby, had their first child in 2010, they — like many millennial parents — decided that instead of shelling out for daycare, Chris would stay home full-time. But when Libby left Chris with their infant son for the first time, she also left him with so many basic reminders about how to care for him, that he jokingly took to writing them all down on sticky notes. In time though, Chris began using those notes as a way to document the funny side of full-time parenting — and the result was amazing. This stay-at-home dad leaves Post-It Notes for his wife to find around the house, and, unsurprisingly, they've become a huge hit online.

According to ABC News, what first began as an inside joke between Chris and Libby turned into something much bigger when he began posting photos of his handwritten notes online. Seven years and one more child later (the couple welcomed a daughter four years ago), Chris' parenting Post-Its have attracted millions of visitors to his website Message With A Bottle, and his various social media accounts. And it's not hard to see why: his notes perfectly capture the often-absurd reality of stay-at-home parenting, in a way that can't help but make you laugh out loud.

If you're a parent of a young child (or if you've ever been one), chances are Chris' posts feel painfully relatable. The notes, which he shares on his Tumblr page, as well as his Instagram account, span all kinds of funny parenting topics, like dealing with toddler tantrums, the misery of cooking for children, or the fact that, when you're a parent, the last day of school usually isn't a celebration.

Some of Chris' notes, on the other hand, say all the snarky things most parents have thought at one point or another, but don't actually say out loud. Because, uh, you know, we don't want to traumatize our children:

While another post reminds the world that, no matter how sad it may be for a child when they lose their beloved stuffies, it is always, always, so much worse for their parents:

These days, Chris has branched out beyond simply posting Post-It Notes though: in addition to freelance writing career and comedy (he does stand-up), he's also written three books, including a parenting guide for dads called The New Dad Dictionary — Everything He Really Needs to Know – from A to Z.

As for Libby — whom Chris often jokingly refers to in his work as his "permanent roommate" — he told ABC News that, even after all this time, she still finds his notes funny. And as much as he pokes fun at their parent-life together in his notes and blog posts, he said that she has "always been one of my biggest supporters."

There's no question that parenthood isn't always easy, but if there's one thing to be learned from the couple? It seems that a good sense of humor might just be the key to surviving it with your sanity intact.