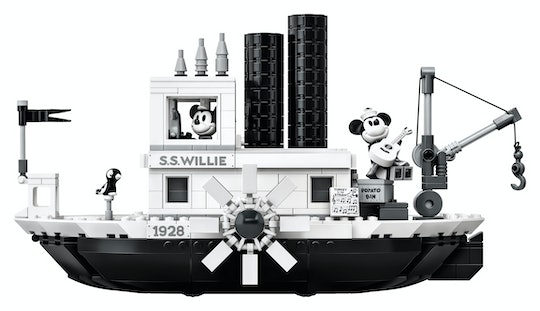 Every once in a while, something truly unique makes it on the market. It could be a design that catches the eye, or a singular experience that delights the senses. In the case of the Steamboat Willie LEGO Set, it's both. The design is based on a concept that came from what LEGO said was a "fan fueled crowdsourcing campaign," and it's stunning.

Releasing on April 1, the Steamboat Willie LEGO set will feature "steam pipes that move up and down and paddle wheels that rotate when the boat is pushed along." It's designed to be both beautiful and interactive, celebrating the 90th anniversary of the iconic Mickey Mouse cartoon. At $90, it's a pricey set, but the stark black and white colors combined with the engineering and building magic that it creates is well worth it. It comes in at a staggering 751 pieces, meaning that it is really best for older children and adults, because that's a lot of pieces and money to get lost by your 5-year-old, for sure. It comes with a Mickey and Minnie figurine, bedecked in their 1928 finery and shape. It's truly a blast from the past, and fans will no doubt fall in love with the set.

Growing up, I adored all of the old cartoons. When I was really little, my grandmother would put me in her living room and turn on VHS tapes of the classics, Steamboat Willie included. There is something mysterious and magical to the shocking black and white imagery that is displayed in the Disney short film from 1928. It's sparse in its design, and more than a little risqué, featuring a giant anthropomorphic cat bullying Mickey before taking a big bite of tobacco chew and spitting it into the air. Meanwhile, Mickey plays the regular not-anthropomorphic creatures aboard the steamboat like musical instruments, no one caring that in the end, they are all then animals.

The unique monochromatic beauty of the cartoon is what makes Steamboat Willie so stark and stunning. It is so fundamentally different from what we're used to seeing nowadays, truly a departure from the hyper-animated computer perfection of newer Disney films. There is no CGI, no score full of every instrument in the orchestra, no rolling beads of water to follow with your eye, or flashy musical numbers. It is a simple tune played behind a simple animation with a very basic storyline, but it still works. It captures the imagination like few other short films have been able to accomplish. Perhaps it's the novelty of it, perhaps it's the history, but it's gripping.

Given its complex historical and aesthetic value, it's no wonder that it's popping up on everything from new original dolls to leisure wear. It's almost shocking that it took 90 years for LEGO to make a black and white Steamboat Willie kit. But they've more than made up for it, because this set hits it out of the park. According to LEGO, "The boat’s bridge has room for a minifigure and play-inspiring nautical details such as the ship’s wheel, life buoy, and buildable bell. On deck there is a working crane to lift the ‘potato bin’ cargo aboard, and this unique toy building set comes with new-for-April-2019 Mickey Mouse and Minnie Mouse minifigures, each with special silver-colored decoration, plus a parrot figure." Y'all. It has a. potato. bin. That means Pete can throw Mickey in the tiny room to peel the potatoes, and Mickey can lob one at the jerk crow that does nothing but laugh at Mickey. (Even if he kinda deserved it for that whole cranking the cow like a music box bit.)

This Steamboat Willie Lego set is an instant classic that will become an heirloom toy in your house. Get one before they sell out.