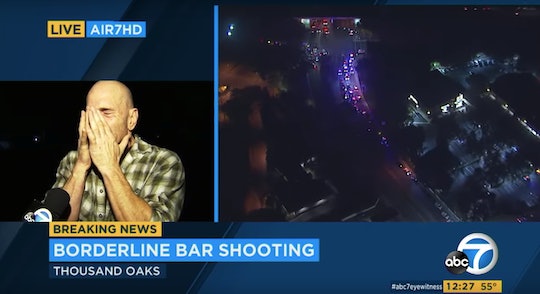 Last night a gunman opened fire in a popular bar in Thousand Oaks, California, killing at least 12 people and injuring dozens more. In the past few weeks alone, Americans have witnessed the Pittsburgh synagogue massacre and dozens of pipe bombs sent to high ranking Democrats. Understandably, many are reeling from yet another tragedy, including one stepdad whose heart-wrenching account of the Thousand Oaks shooting highlights the shock and horror everyone should be feeling right now.

After managing to escape the Borderline Bar & Grill in Thousand Oaks where a gunman opened fire, the stepfather, identified only as Tim, described how he and his stepson, John, made it out of the deadly scene and what they had witnessed inside, as reported by ABC 7 Eye Witness News Los Angeles. "He didn't say anything at all. He just kept shooting and I should have stayed until he changed his clip, but I was worried about my boy," Tim told the news outlet. "My son thought it was a joke, so I pulled him down and got behind cover."

Tim's one wish was that he could have done more. Fighting back sobs and continually stopping to catch his breath, he told the news outlet:

This father's gut-wrenching reaction to Thursday's tragedy is hard to watch, but it's important to see past just the headlines. He lived through something that no one should have to deal with — the very real prospect of losing their family, their own flesh and blood to a random and senseless act of violence.

Fears of shootings and gun violence in seemingly safe places are quickly becoming the grim reality for many. Wednesday night's shooting is the second deadliest attack of 2018; the first being the Parkland school shooting which took place on Feb. 14 of this year and left 17 people dead, according to USA Today. But we cannot afford to become complacent or numb to such tragedies.

While many are frustrated with the typical "thoughts and prayers" messages that are sent out after such tragedies, there's hope for gun safety reform change in the new future.

The results of this year's midterm elections put several gun violence prevention advocates into office, according to Moms Demand Action. In California, for instance, the election of Gov. Gavan Newsom and Attorney General Xavier Beccera were considered huge wins. Both candidates named gun violence prevention as one of their major campaign promises, according to the Los Angeles Times. Beccera vowed to "take away guns from those who "don't have a right to own them," and Newsom continues to be "vocally anti-gun" even after his win.

But it still doesn't change the fact that Americans are 25 times more likely to die by a gun than any other country in the world, according to Moms Demand Action.

As the tight knit community of Thousand Oaks continues to reel in the aftermath of yet another American mass shooting, the fear in a parent's heart about having to worry about your kids will never go away. But, until comprehensive gun safety measures are put in place, it will and should remain on the top of everyone's list of concerns.