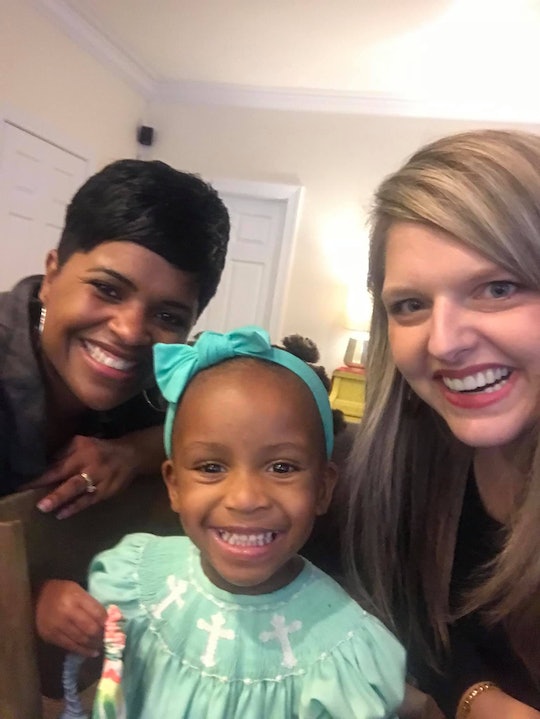 Georgia mom Stephanie Hollifield may not have originally set out to be a mom of five, but life definitely had other plans. She and her husband were already parents to two biological children and a third they'd adopted through foster care when they found out they were expecting again. Yet when Hollifield was six months pregnant, they unexpectedly became foster parents to 7-week-old Haley, whom they also later adopted. Like most moms, Hollifield often looks online for parenting advice, but this story about Hollifield, a white mom, asking for advice styling her black daughter's hair has turned out to be such a beautiful example of how social media can bring people together.

In a recent post on her Facebook page, Hollifield — a self-professed "clueless white momma" — asked her "Black Friends of Social Media" for help caring for her now 2-year-old daughter's hair, according to Yahoo. She explained that she'd asked friends, and even strangers, for help and tried every product recommendation she could find, but felt the "trauma of her daily hair combing" left both her and Haley beyond frustrated, and that, still, her daughter's hair soon ended up "tangly and clumpy" despite her best efforts.

Though Hollifield was no doubt hoping for some help, what happened next was even better than she'd expected: a local black mom with three young daughters of her own offered to come to Hollifield's house and teach her how to style Haley's hair.

Hollifield gratefully took her up on her offer, and so Monica Hunter soon showed up with hair products, accessories, and a whole lot of mom-support. Hunter told Yahoo that she wanted to see Haley in person because "it was important to [her] to touch Haley’s hair," in order to give Hollifield advice that would actually be valuable, since, as she noted, "some hair is really soft, some is really kinky. With some, the coils are loose, with some, they’re tight."

By the time she had finished, Haley had herself a new style involving oils, some ponytails, and a cute headband to finish off the look, but more importantly, Hollifield had a ton of new knowledge. Hunter taught her, for example, that she needed to wash her daughter's hair less to maintain its moisture, and to avoid the daily combing both she and Haley hated.

In a follow up post on Facebook, Hollifield gushed about Hunter's act of kindness, and wrote, that she'd given her "her time, advice, headbands, combs and hair product," and "asked for nothing in return and wouldn’t accept my money."

What's more though is that what started out just being one mom's way of helping another mom with her daughter's hair turned into one seriously meaningful and supportive new friendship.

The story quickly warmed the hearts of thousands of Facebook users, and for good reason: not only is it pretty much the opposite of the kind of mom-shaming so many women experience, it also seemed particularly meaningful at a time when the divide between white and black Americans (and certainly white and black American women) feels especially pronounced.

Yet while Hollifield admitted she was at first caught off-guard by the reaction, she wrote in a post for her blog, Momstrosity, that she soon realized why it was a big deal. She wrote, "In our country, where everything seems so divisive, this quiet act of kindness spoke loudly to people from all walks of life."

As much as it clearly resonated on a wider scale though, Hollifield tells Romper that, to her, her original post was really just one more example of a well-meaning mom looking to others for a little motherhood advice. And in fact, having the experience of parenting a black son prior to becoming Haley's mom had already taught her the value in reaching out and asking questions.

"I really wasn’t shocked that people were helpful in their responses," she tells Romper. "I have noticed, since adopting my older son, that the black community is there to partner with me. My black friends and community members have stepped up out of the goodness in their heart when I have questions about race and culture."

She continued, "I have had felt comfortable and supported in asking tough questions and exploring the specific cultural needs of my children, so I knew my friends would be helpful in hair advice."

Still, she did admit that Hunter's offer to personally come to her home was a surprise — she tells Romper that "it was such an intimate and genuine reflection of who she is," and added, "I am blessed to know her and to now call her a friend."

As a white mom of black children, Hollifield tells Romper that she's "aware of the looks and whispers all around when [they] go out in public," and that it's not always easy for her or her kids. But part of caring for her children the best she can, she says, is recognizing that there will be things she just doesn't know, and that she'll need to ask for help.

Hollifield says, "I’m going to listen to whoever will teach me. I can’t be scared or nervous that I will say the wrong or offend someone. I’m sure I will. And when I do, I will listen and learn and do better next time."

As much as it may have been a challenge for Hollifield to find the advice she needed for her daughter, it sounds like it couldn't have possibly worked out any better for her, or for Haley. Hollifield wrote on her blog that Hayley was beyond thrilled with her new hairdo, yet Hunter told Yahoo, "you all have no clue, that little girl Haley — and Stephanie — blessed me more than I blessed them." In fact, Hunter shared with the news outlet that they were already planning to meet up again, and that her own daughters couldn't wait to join her.

If you have kids, then you're probably well aware that motherhood isn't easy, and sometimes it can feel like everything you say and do is at risk of being judged by others. But sometimes, we're reminded that, ultimately, we really *are* all in this together. And the more we can reach out and offer help and support, the better off all moms — and their kids — will be.