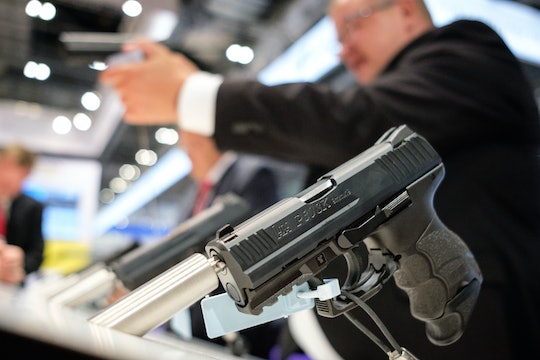 It never ceases to baffle me how casually some people handle deadly weapons. On the heels of more mass shootings, and Congress's upsetting, continued inaction on gun safety, a new story about an FBI agent's stolen gun is yet another terrifying reminder that people are often far too lax about guns getting into the wrong hands. When it seems that even one of the most highly-trained experts in the country may have been too careless with a dangerous weapon, it's time for a serious conversation.

The FBI is investigating one of its counterterrorism supervisors, a unit chief named Robert Manson, whose gun was stolen from his hotel room after a night of "heavy drinking," according to The New York Times. According to what Robert Tufano, a spokesman for the Charlotte-Mecklenburg Police Department Manson was in Charlotte, North Carolina, back in July for training when he invited a woman he met in a hotel bar back to his room at the Westin. Subsequently, while an off-duty Manson was "incapacitated by alcohol," according to the police report, the woman stole cash, a Rolex watch, and most importantly, a Glock 27 firearm from him, and disappeared into the night. So far, according to the Times, no arrests have been made, which means that it's entirely possible that the stolen gun is still floating around somewhere.

The FBI issued the following comment to Romper: "The incident is the subject of an internal investigation."

It seems that Manson may not have been following proper procedure when it came to handling his gun. According to the Times report:

Federal law allows agents to carry concealed weapons while off duty, but not while they are intoxicated. It is unclear where Mr. Manson kept the gun. F.B.I. rules prohibit agents from leaving their guns in unsecure places. Every room in the Westin is equipped with a safe.

So either Manson did not properly secure his gun, or his lady friend is an expert safe-cracker. Not to underestimate her prowess, but the former possibility seems more likely.

A high-ranking FBI agent should be hyper-aware of gun safety — but, really, anyone who owns a deadly weapon should be incredibly aware of where it is at all times, and if it is stolen, they should face a penalty. But, according to the Center for American Progress, there are currently no laws on the books that punish gun owners or gun dealers whose guns have been stolen. (Though there are a few places with laws that require gun owners to lock their guns in a secure place.)

Gun accidents have caused an astounding number of casualties in the past. A recent USA Today investigation found that children died from accidental shootings every other day in this country. Far too often, kids are finding improperly secured handguns in their homes or their friends' homes and innocently playing around with them, with tragic consequences.

Then, of course, there are the shootings that aren't accidents at all, in which lax gun laws allow dangerous people to get their hands on deadly weapons. Take, for example, the recent mass shooting in Sutherland Springs, Texas. The man who killed more than 20 people at a church had previously been court-martialed for assault on his wife and child, and yet he still managed to buy a rifle from a sporting goods store.

This latest incident with the agent's stolen gun isn't even the only time in recent months that FBI agents have had issues with their firearms. In one case, an FBI supervisor was accidentally shot by his own family member when he asked that family member to bring his gun to him, and it discharged. In another case, a special agent was charged with drunk driving, and was carrying a firearm while doing so against protocol.

Proponents of gun rights often argue that the issue isn't guns themselves, it's the people who have the guns. But what does it mean when even the mostly highly-trained men and women don't always follow the proper procedure? It means it's time for a change.