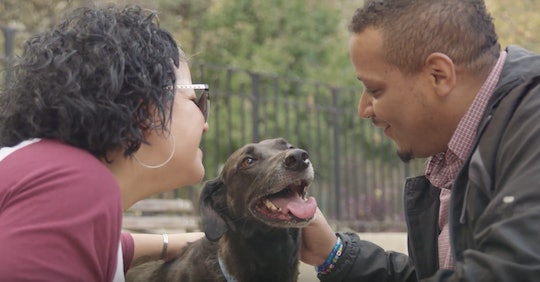 There is something so special about the bond between a pet and their owner. Pets are there for people in the worst of times and the times when they need a companion the most. Every pet touches their owner in a special way, but this instance might be one of the most unique yet. This YouTube video details how a dog "knew" his owner was pregnant before she did and the story will hit you right in the feels.

Although the video and story is ultimately an advertisement for Pets Best Pet Insurance, the story behind it is so incredibly beautiful that the message remains. And although the story is only a minute or so long, it will put you on a roller coaster ride of emotions. In the video, Rachel (no last name is given, according to People) talks about how her rescue dog, Apollo was there for her in times of uncertainty. "My husband and I had difficulty getting pregnant," Rachel tells the camera. "We went to adopt a dog, I saw Apollo, and I fell in love."

Rachel and her husband continued to try to get pregnant, but to no success. "Apollo knew that I struggled to get pregnant," Rachel said. "Apollo was there for me when I had my lows of lows." But a couple of months later, after Apollo's adoption, according to the video, something interesting happened.

Apollo began acting a little silly. "I remember one day, Apollo put his snout on my abdomen and he just rested it there for quite a long time," Rachel said. "And I was like, 'what is this dog doing?' That was abnormal behavior. He had never done that before."

So Rachel took a few photos of the dog acting out of character. But three weeks later, she would come to discover something much more interesting (and exciting) than her dog acting out of character — she was pregnant. Apollo apparently knew something was going on. "Looking back on it now, I realize something special was going on," Rachel said in the video. "He can't speak English, but he tells me in his own way how much he loves us and this baby." If your heart hasn't melted into a puddle just by watching the video and listening to Rachel and Apollo's story, something is wrong.

Rachel's story is super sweet and highlights the importance of having a strong support system when the journey to conceive becomes incredibly stressful. But Apollo is not the first dog to sense that his owner was pregnant. Some people have taken to online forums to ask if their own dog's strange behavior had anything to do with them being pregnant or getting pregnant. This could be, according to Baby Gaga, because dogs have a heightened sense of smell and can sense when their owners are acting differently.

There is a scientific reasoning for this, too. Dogs are very aware of when their owners have hormonal changes, according to National Geographic, which can make them deviate from their normal behavior. A dog's sense of smell is so strong, according to Animal Planet, there is a chance that your dog may be able to tell that you're pregnant even before you know (like Rachel and Apollo). "Although it hasn't been scientifically explored, it's within realm of reason," Jennie K. Willis, an applied animal behaviorist with Colorado State University's College of Veterinary Medicine told Animal Planet.

But according to Rachel, in the video, Apollo's behavior towards her and her son, Donovan has been nothing but positive. How incredibly sweet.

More Like This
Meghan Trainor Shares Baby News After Dropping Hints On TikTok
Mom Gives Birth To Record-Breaking 16-Pound Baby
22 Valentine's Day Pregnancy Announcement Ideas Sweeter Than Candy
Teacher Shot By 6-Year-Old Student Told School He Had A Gun, Was Told To "Wait"
What Parents Are Talking About — Delivered Straight To Your Inbox