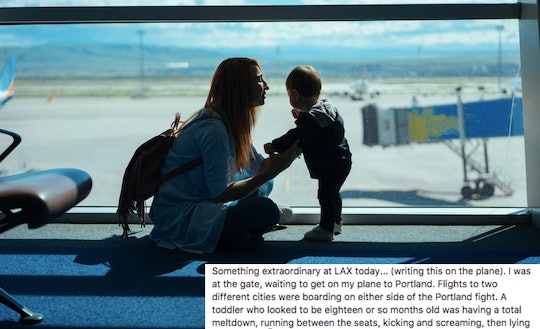 If you're a parent, then you're probably well-acquainted with the fresh hell that is traveling with young children — especially if it involves an airport. *Shudders* There's just something about the crowded and often-rushed atmosphere that sends toddlers into tantrum mode faster than you can say, "No more snacks, sweetie." Oftentimes, it's horror stories that we read about on social media. The rude stranger who shamed a breastfeeding mom. The family who got kicked off a flight because of their inconsolable child. However, this story of strangers jumping in to help a struggling mom at an airport will give you all the feels.

On Friday, a woman named Beth Bornstein Dunnington witnessed an incredible act of kindness at LAX — one that she won't soon forget. And I'm guessing neither will the more than 11,000 Facebook users who have already liked her story. Dunnington recounted the series of events that unfolded while she was waiting at the gate to board her flight to Portland. "A toddler who looked to be eighteen or so months old was having a total meltdown, running between the seats, kicking and screaming, then lying on the ground, refusing to board the plane (which was not going to Portland)," she wrote on Facebook. "His young mom, who was clearly pregnant and traveling alone with her son, became completely overwhelmed... she couldn't pick him up because he was so upset, he kept running away from her, then lying down on the ground, kicking and screaming again."

As Dunnington described, the pregnant mom ended up sitting on the floor — alongside her toddler, who was continuing to have a meltdown — and started crying. What happened next is inspiring AF.

"The women in the terminal, there must have been six or seven of us, not women who knew each other, approached and surrounded her and the little boy and we knelt down and formed a circle around them," Dunnington wrote. "I sang 'The Itsy Bitsy Spider' to the little boy... one woman had an orange that she peeled, one woman had a little toy in her bag that she let the toddler play with, another woman gave the mom a bottle of water. Someone else helped the mom get the kid's sippy cup out of her bag and give it to him." She continued:

It was so gorgeous, there was no discussion and no one knew anyone else, but we were able to calm them both down, and she got her child on the plane. Only women approached. After they went through the door we all went back to our separate seats and didn't talk about it... we were strangers, gathering to solve something.

I'm not crying, you're crying. How incredible are these women? They saw a problem, stepped in to help a mother who clearly needed it, and then went about their days. Dunnington perfectly summed up the moving experience, writing, "It occurred to me that a circle of women, with a mission, can save the world. I will never forget that moment."

Judging by the comments her post has received so far, Dunnington's story will be remembered by many others, too. "Best story ever. Yes, women can & will save the world," one Facebook user wrote.

Another person commented, "I'm crying reading this. We've all been there as mothers."

Yet another Facebook user chimed in, "A circle of women is the most powerful structure in the world."

Guys, we seriously need more people in the world like the women in this story. And, like the stranger who soothed this pregnant mom's crying toddler while she rested on a flight, as Today reported.

Or like this woman who helped out a mom of three by rocking her baby to sleep on a flight, according to Shareably.com.

So instead of judging or publicly shaming exhausted, frazzled parents at airports, during flights, or anywhere else for that matter — like the person who originally took and posted this photo of a mom who allowed her baby to rest on an airport floor, reported Today ...

Maybe, just maybe, we should all consider putting ourselves in someone else's shoes and become part of the solution. Because raising tiny humans is hard enough is tough.. And we could all use a little more compassion in our lives. Thank you so much, Dunninton, for sharing your inspiring story.