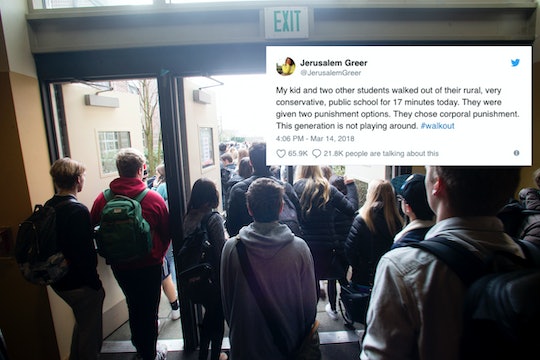 This Student Was Paddled At School For Walking Out, & Twitter Is Outraged

On Wednesday, March 14, students from across the country left their classrooms as part of the National School Walkout, a student-led demonstration organized to protest gun violence. The 17-minute long walkout — one minute for each victim of the Feb. 14 mass school shooting in Parkland, Florida — was the latest in a growing movement of inspiring student activism, and it certainly made a powerful statement. But school administrators varied in their support of students' participation, and at one Arkansas high school, this student and his friends received corporal punishment for walking out.

Greenbrier High School senior Wylie A. Greer's story first came to light after his mother, writer Jerusalem Greer, tweeted about it Wednesday, and it wasn't long before it was liked and shared by thousands of shocked Twitter users. Though it's not entirely surprising that some students faced consequences for leaving the classroom during the walkout (school attendance is compulsory in most states until age 18, and schools are legally within their rights to punish students for unexcused absences), the idea that corporal punishment is still considered a reasonable disciplinary measure is honestly pretty hard to believe. Yet "paddling" isn't actually an uncommon punishment in Arkansas schools — and it's not the only state where that is the case.

In her tweet, Jerusalem Greer explained that after "[her son] and two other students walked out of their rural, very conservative, public school" Wednesday, school administrators offered them the choice between two different punishments for leaving the classroom. In an email statement to Romper, Wylie Greer explained that the punishments were either corporal punishment or a two-day, in-school suspension, and that he and his classmates ultimately "chose the paddling, with the support of [their] parents." Greer said,

I received my punishment during 6th period. The dean-of-students carried it out while the assistant principal witnessed. The punishment was not dealt with malice or cruelty, in fact, I have the utmost respect for all the adults involved. They were merely doing their job as the school board and school policy dictated. The ‘swats’ were not painful or injuring. It was nothing more than a temporary sting on my thighs. The dean-of-students did stress however that not all punishments like this ended this way.

But even though his punishment may not have been "painful to [him]," Greer emphasized that he still thought "corporal punishment has no place in schools," and added, "the idea that violence should be used against someone who was protesting violence as a means to discipline is appalling."

Under the First Amendment, Americans have the right to peaceful assembly — and that includes the teens who took part in the walkout. That means that, according to the American Civil Liberties Union (ACLU), schools don't actually have the right to specifically punish students for demonstrating, though they can enact the usual consequences for missing class in general. It's not clear exactly what Greenbrier High School's attendance policy is (the school did not immediately respond to Romper's request for comment), but there has certainly been much debate over the years in general regarding whether corporal punishment should be allowed in schools.

In 2016, former Secretary of Education John King issued a letter to governors and chief state school officers urging them to end the use of paddling in schools, according to Pacific Standard. King argued that the use of corporal punishment was an act of "intentionally inflicting pain on a child as a punishment or in an attempt to change the child's behavior," and noted that, statistically, there were concerning disparities in how it was used, with boys, non-white students, and students with disabilities receiving corporal punishment at a much higher rate than others.

Unfortunately, in Arkansas at least, King's words might not have had made much of an impact. In March 2017, a bill sponsored by Arkansas Sen. Joyce Elliot to ban corporal punishment in public schools failed to pass in a vote by the state's Senate Education Committee, according to Arkansas Times. Though Elliot argued that "it should be the mission of our schools ... to teach our kids ways of resolving conflict other than there having to be physical conflict," not everyone agreed with her view — for one, Arkansas Sen. Alan Clark said that, actually he found that "[his] experiences with corporal punishment," including against his own son, were "quite effective."

On Twitter, many users commented on the original post suggesting that Jerusalem Greer take legal action on behalf of her son, but since corporal punishment in schools is actually legal in her state, that wouldn't exactly accomplish much. Many did note though, that at the very least, the schools should stop referring to the practice as "swats" or "paddling," given that they minimize the impact of what is actually occurring — and though that likely won't happen anytime soon, it's definitely an important point.

For Wylie and his classmates, the experience of standing up for what they believed in was already a challenge in itself (especially since most of their peers remained in class) and the fact that they then had to opt between a suspension and physical punishment is harrowing. But his mother, for one, said in a follow-up tweet that she was "proud of [her] kid for his willingness to endure," and it seems pretty safe to assume she's not the only one who feels that way.