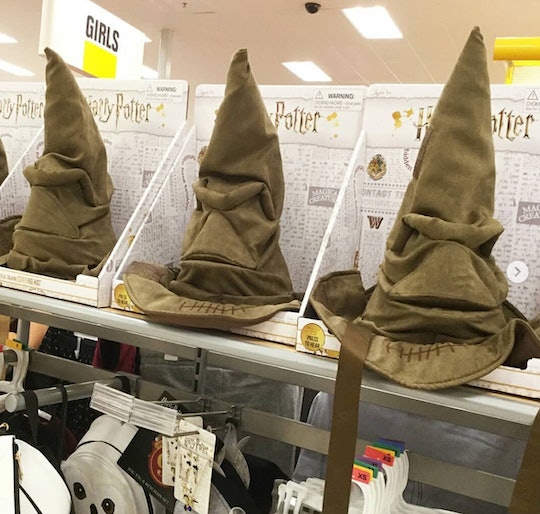 You Can Now Get A Sorting Hat At Target, & *Officially* Find Your Hogwarts House

"Not Slytherin, NOT Slytherin" is the chant of not only Harry Potter, but of countless others as they get sorted into their respective Hogwarts houses. Hufflepuff for the champions of light, Gryffindor for the brave and headstrong, Ravenclaw for those of keen wit and strong mind, and Slytherin, the house of "He-Who-Shall-Not-Be-Named." Thanks to Target, learning which Hogwarts House you belong to has become so much simpler, thanks to the new Harry Potter sorting hat that they're selling in their stores for $24.99. Which is a steal compared to going to The Wizarding World of Harry Potter and getting sorted there.

Target usually has some killer merch for Potterheads. From graphic tee shirts to Hogwarts ties and mugs, there isn't much that can't be found in everyone's favorite department store. This new Harry Potter sorting hat, or more aptly, the Hogwarts sorting hat replica, sings and dances around just like the hat in the series. I can see it being the perfect treat for your own young Potterheads upon their finishing the series. Because, let's be honest, after Deathly Hallows, you need some serious cheering up. The sorting hat's sheer silliness could pull you back from the sheer amount of awful death in those last few hundred pages.

However, I will remark that it is a bit strange to be selling sorting hats in the domain of the Ilvermorny School of the The Magical Congress of the United States of America or, MACUSA as all the American witches and wizards refer to it. Our school doesn't sort young witches and wizards into the four houses of The Horned Serpent, Wampus, Thunderbird, and Pukwudgie by standing before a Gordian knot in the stone floor of Ilvermorny. According to The Ilvermorny School of Witchcraft and Wizardry, "If the Horned Serpent wants the student, the crystal set into its forehead will light up. If the Wampus wants the student, it roars. The Thunderbird signifies its approval by beating its wings, and the Pukwudgie will raise its arrow into the air."

This is arguably much harder to make into a replica, and therefore Target is assuming that many American witches and wizards would like to transfer out of the Ilvermorny district and head into Hogwarts as an international exchange student. Headmaster Minerva McGonagall is truly a gifted instructor and animagus, so I don't blame your little witch or wizard from sending an owl to Hogwarts to beg for a spot. Being a Horned Serpent/Ravenclaw myself, I totally get the inclination to know both.

Undoubtedly, the new Target Harry Potter sorting hat will sell out faster than a speeding hippogriff, so you're going to have to get on your fastest broom and grab about six galleons to secure your place in line. Although, if we're being honest, you might say you're going into Target and only spending six galleons, but in reality it's more like 50 galleons, several sickles, and more than a handful of knuts, am I right?

You only wanted the sorting hat, and while you were in there you found a deal on eye of newt, powdered asphodel was on sale, and you really need to get rid of that evil wizard two blocks over. They had a new face mask made of dittany that you've seen on the website for the Daily Prophet, and of course, you're clean out of Cheerios and toilet paper, and the muggle stuff is just better in that instance.

Although you'd best get to the toy aisle first, and protect that cart with a strong warding spell. Because you know someone will want to duel you for it, and you just don't have time to touch up your hair.