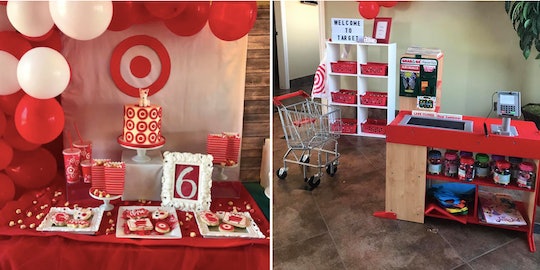 This 6-Year-Old's Incredible Target-Themed Birthday Party Is ~*Everything*~

Chelsey Flint — founder of Chelsey Flint Events and stylist behind the Target-themed party — posted about the adorable bash on her Facebook last month, describing how magical and unique the event was. “I can now die and go to heaven...life’s complete!" Flint shared. "I’ve had this vision for awhile and my sweet client let me bring it to life for her 6 year old Olivia! Every detail was perfect!"

Indeed, no detail was missed. The red-and-white birthday party featured a shopping station with a register and scanning belt and a food table complete with a red bullseye cake and dog.

But the Target goodness didn’t stop there. Flint also included a Starbucks coffee station, complete with cupcakes posing as the coffee shop’s signature whipped cream drinks, and the young party-goers were even able to make their own name tags to accompany their red outfits. Flint tells Romper that the kids shopped for the entire two hours of the party.

Perhaps the most striking part of the party setup was a real Target shopping cart, which Flint was able to borrow from a willing Target manager after visiting five different stores. The cart has caused a bit of hilarious controversy online, becoming the “accidental star of the party,” according to Flint.

“I talked to the manager and told them about my party,” Flint tells Romper. “I was so happy he said yes but putting it in the SUV in front of other customers was a bit embarrassing.”

The party’s theme was originally pitched by Flint’s niece, Lyla, who said she wanted a Target party for her fourth birthday.

“I honestly didn’t think much of it until I went to Target one day and saw people shopping in the Dollar Spot section and I thought it would be cute,” Flint tells Romper. “I pitched the idea to my client and she was all for it. Everything turned out so great and the response has been incredible.”

Flint’s client had just bought a toy cash register as well, which would eventually prove as the perfect addition to the party’s décor.

Flint — who's been planning parties since childhood but began professional styling five years ago — tells Romper this was the most fun she’s had since beginning her business.

It's probably safe to say, these incredible Target birthday parties are here to stay — as they should.

It's no surprise that social media users are loving the fun party idea. "I just died and went to Target heaven...so cute!!" a Facebook user wrote. "This needs to be my next birthday theme!" another insisted.

If the hype is any indication, it might be time for superhero and princess parties to see themselves out the door thanks to the new Target-themed birthday parties on the block.

More Like This
David Harbour Transforms Into A Santa No Kid Wants To See In 'Violent Night'
"Corn Kid" Handed Out Over 40,000 Cans Of Corn At A Food Bank Ahead Of Thanksgiving
30 Great Non-Toy Gift Ideas For Kids
Rules, Printables & Tips For Making Elf On The Shelf Magic