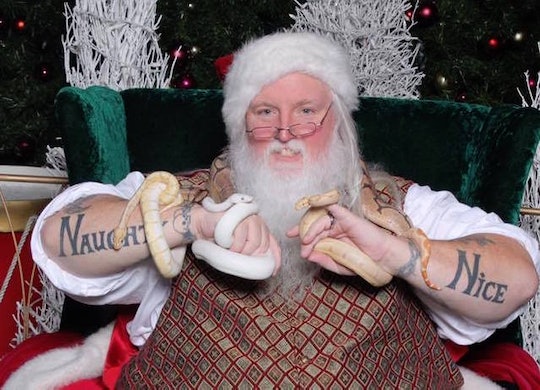 Maybe any burly man with a thick white beard and rockin' some red velvet can pass for Santa, but it takes that special something for someone to take the essence of Santa and make it into their very own. Such is the case for Scott Diethorne, affectionately known as "Santa Scott," a Pennsylvania mall Santa whose antics such as tossing kids over his shoulders for pictures, posing with all kinds of pets, and flashing his "Naughty" and "Nice" arm tattoos has earned him an enthusiastic fanbase and set him apart from the rest. This year, though, the beloved mall Santa was reportedly asked to tone down his act, much to the disappointment and outrage of his local following.

Diethorne had been striking the outlandish Santa poses at malls throughout Middletown Township in Pennsylvania, which is about an hour outside of Philadelphia, for about two decades when it all came to an end this year. Yes, Deithorne is still employed at the Oxford Valley Mall, but the new company managing the mall's Santas has reportedly called it quits on what are arguably the most endearing parts of his schtick in favor of a more traditional mall Santa experience. According to Vice, the local mall reportedly told him that "he couldn't show off his tattoos or fling any toddlers onto his shoulders this season—traditional photos only."

In an emailed statement to Romper, a Cherry Hill Programs management spokesperson explained the decision this way:

During this special time of year, we are focused on delivering a magical holiday experience. We remain dedicated to preserving the tradition and image of Santa with authentic holiday visits for every guest to our programs. We uphold the magic of the one and only Santa for all believers, by providing a consistent approach at every Experience we operate, not just Oxford Valley Mall. This legacy approach applies to all locations.

But Santa Scott fans seem to believe that he had been doing a great job of "delivering a magical holiday experience" by infusing his own personality into Santa's usual "ho ho ho." One of them, Amanda Nagy, took to Facebook to protest the change. "This new photo company won’t allow him to show his tattoos anymore, do fun poses, etc!" she wrote on Nov. 13. "If you guys know him, you know this is all of the stuff he is known for - bring our Santa back!!!'

She urged fans not to boycott Santa Scott at the mall, though. After all, those who love him still want him to have work over the holiday. But, delighting children and adults alike as a mall Santa isn't Diethorne's only Santa gig. According to Philly.com, the 50-year-old father of nine and grandfather of 10 also makes appearances at local photo studios, fundraisers, private parties, and Breakfasts with Santa. He squeezes all that in between Thursday and Sunday each week between Nov. 10 and New Year's Eve, when he takes a break from his regular job as a truck driver in order to be Santa.

Scott also spend his evening each Christmas Eve delivering presents to children with special needs, Philly.com reported. He also shows off his silly side posing with any any every pet people bring to him at his signature pet night. People love it. No wonder they're bummed, as the comments on Nagy's Facebook post illustrate:

Let Santa Scott be himself. We love him.

Seriously?! I swear i will protest. This is ridiculous my kids love going every year just because hes so awesome! No fair.

There were others who were more understanding of the company's decision. One commenter who identified herself as a professional photographer wrote that picking the kids up, for example, could present a major liability risk to both Diethorne and the company. A man claiming to also be a professional Santa pointed out that such a job comes with a contract and rules that must be followed.

Either way, those who miss Diethorne's old antics can always visit a private photo studio or hire him to experience it this year. Or simply pay him a visit in his new role.