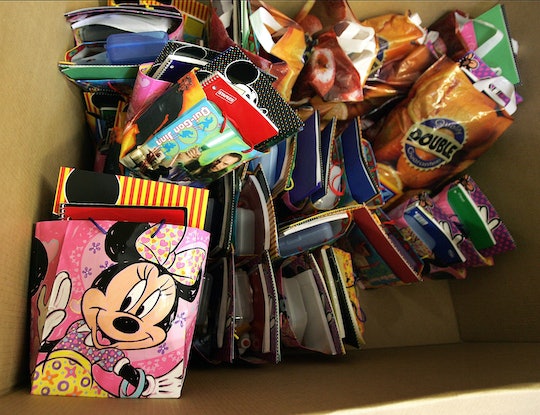 When Teresa Danks, a teacher in Oklahoma, needed to find a way to stock her third-grade classroom with school supplies for next year, she got a little bit creative. After shopping at garage sales and thrift stores, Danks decided to turn to an unlikely alternative: the kindness of strangers. Danks asked strangers to help her buy school supplies, because they were hard to buy on her own, and education budget cuts in the state have only made things harder.

When Danks spoke with her husband about all the money she was spending on supplies for her classroom, he had an idea that started out as a joke, but quickly turned into a viable option for Danks. She told ABC News:

My husband and I were just talking that morning and he kind of jokingly said, ‘You could always make a sign and go on the corner like the panhandlers.' I said, ‘You know what? I think I’m going to do that. That’s a great idea.’

So, like many people trying to get a message across, Danks bought a poster board, then wrote “Teacher Needs School Supplies! Anything Helps," on it, and went out in public to see what the response would be. She was pleasantly surprised.

At first, Danks was a little nervous to stand at the busy intersection she chose and hold up the sign she had made. But the reactions she got were mostly positive. She said, according to Yahoo!:

It just felt so scary. But it was a wonderful feeling to hear people being so supportive of teachers.

Danks makes an annual salary of around $35,000, and reportedly spends almost $2,000 of her own money every year on her classroom. She collected around $50 in cash when she first "panhandled," and when she posted a photo of herself at the intersection on Facebook, it went viral and caught the attention of a local news station, which then spread her story.

And even though it's a great thing that people were willing to help and Danks got a little bit of much-needed assistance to buy supplies for her students, it's extremely unfortunate that that's something she had to turn to in the first place.

According to The Washington Post, Oklahoma ranks near the bottom among all 50 states when it comes to funding per pupil. The state spends about $8,000 per student, and only Arizona, Idaho, and Utah spend less than that. And although the country has sort of bounced back from the Great Recession in 2008, according to that outlet, Oklahoma’s education spending has still fallen 14 percent. That leaves teachers like Danks to have to make up the difference, or students are left without some basic supplies. Danks told the Post:

We are given pencils and paper, and we are given textbooks … (but) it goes beyond pencils and paper...It might be paint and glitter, it might be batteries if we’re talking about science projects, or water bottles for the volcanoes. … We’re constantly replenishing and we’re trying to do these things week after week.

And with tax cuts and a budget crunch, some of those things just aren't covered by the little funding schools get. So, teachers like Danks do what they can, even if it means reaching into their own pockets or standing on the side of the road and asking strangers for help.

Since, according to The Washington Post, Oklahoma hasn't raised teachers’ salaries since 2008, it's not exactly a surprise that Danks had to turn to thriftiness and donations to properly outfit her classroom. But it is a travesty, and something teachers who need to be focused on educating and guiding students shouldn't have to worry about.

According to Yahoo! News, Alicia Priest — president of the Oklahoma Education Association — said teachers across the United States often spend about $450 of their own money each year on school supplies, and that educators in Oklahoma spend "on the higher side" of that average.

But spending even $1 of their personal funds isn't something teachers should have to do. If we really want to value education in this country, we also have to value our teachers, and make sure both educators and students have the supplies they need to teach and learn, without having to panhandle (especially from citizens whose taxes are already used to support schools).