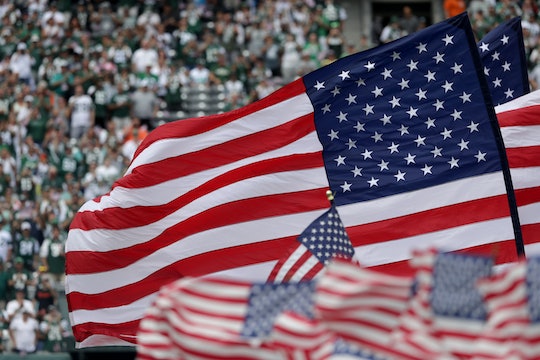 This Teacher Stomped On A US Flag As Part Of A History Class, But He Shouldn’t Be Attacked

Students, parents, and community members in North Carolina were outraged after learning a teacher stomped on an American flag during a history lesson about the First Amendment. According to local news outlet The Fayetteville Observer, a photo taken by a student showing high school teacher Lee Francis standing with his foot on the flag went viral recently, with many calling the act disrespectful and unpatriotic. But Francis has since defended his actions, arguing that he was trying to make a point to his students about free speech rights and flag desecration. Francis has since been placed on paid administrative leave, and is scheduled to meet with officials from the Cumberland County Schools system Thursday as part of an investigation into the incident.

Those condemning Francis' actions have said his lesson was offensive, particularly given his role as a teacher. Speaking to CBS News affiliate WNCN, Fayetteville resident Grayson Chavonne said, “I think it’s inappropriate to teach that in school. If he wants to do that in his own home that’s his prerogative, but it doesn’t need to be taught to our kids.” In a statement released Tuesday, Cumberland County Schools Superintendent Frank Till echoed that sentiment, saying “clearly, there are other ways to teach First Amendment rights without desecrating the flag.”

But Francis has since spoken out in defense of his lesson, and particularly of the claim that stepping on the flag was disrespectful to veterans. He told WNCN,

Of course, it's easy to see why so many people are angry at Francis now that this picture has made the social media rounds. The act of desecrating the American flag is hugely steeped in political meaning, and isn't something to be taken lightly. According to The Fayetteville Observer, Facebook user Sara Taylor — who claimed she has a child whose friend is in Francis' class — argued that the lesson is especially offensive given that Fayetteville is largely a military community. Taylor posted the photo of Francis standing on the flag to her account, and alleged that Francis had asked students for a lighter or scissors prior to stepping on it. She wrote,

What's important to consider about Francis' actions though is that, at the time he stepped on the flag, he was teaching a lesson about the hugely controversial — yet incredibly significant — 1989 Supreme Court case Texas v. Johnson. According to Constitution Daily, a blog published by The National Constitution Center, the case centered on the debate about whether legally banning flag desecration (as many states have done) was unconstitutional due to an infringement on First Amendment free speech rights.

In 1984, Gregory Lee Johnson was arrested in Texas for burning a flag outside of City Hall in Dallas, in protest of the administration of then-President Ronald Reagan. He was fined $2,000 and sentenced to one year in prison, but appealed the conviction on the basis of free speech. In what The National Constitution Center called "a very unusual majority," the Supreme Court ruled 5-4 in Johnson's favor, arguing that his flag burning was "symbolic speech political in nature and could be expressed even at the affront of those who disagreed with him."

Commenting on the ruling at the time, Justice Anthony Kennedy wrote,

The hard fact is that sometimes we must make decisions we do not like. We make them because they are right, right in the sense that the law and the Constitution, as we see them, compel the result. ... Though symbols often are what we ourselves make of them, the flag is constant in expressing beliefs Americans share, beliefs in law and peace and that freedom which sustains the human spirit. The case here today forces recognition of the costs to which those beliefs commit us. It is poignant but fundamental that the flag protects those who hold it in contempt.

Not happy with the ruling, Congress later attempted to pass an anti-flag burning law called the Flag Protection Act of 1989, which the Supreme Court later struck down as unconstitutional. Following the case, Justice William Brennan reminded lawmakers that the Constitution needs to be respected, even when it represents an unpopular ideal:

If there is a bedrock principle underlying the First Amendment, it is that the Government may not prohibit the expression of an idea simply because society finds the idea itself offensive or disagreeable.

Despite the Supreme Court ruling in Texas v. Johnson (which applies only to Texas), North Carolina is one of many states that has made flag desecration illegal. According to The Fayetteville Observer, General Statute 14-381 has made it illegal for anyone in North Carolina,

to cast contempt upon any flag of the United States or upon any flag of North Carolina by public acts of physical contact including, but not limited to, mutilation, defiling, defacing or trampling. ...Any person violating this section shall be deemed guilty of a Class 2 misdemeanor.

While no charges related to Francis' actions have so far been mentioned, Mike Meno, a spokesman for the American Civil Liberties Association, told The Fayetteville Observer that the fact still remains that the Constitution protects Francis, as well as any others, who might stomp on the flag for whatever reason. And what's more, Meno argued, is that students would do well to be taught that important lesson about constitutional rights:

One of the reasons our country is great is that the Constitution gives people the right to free speech and expression, no matter how much others may disagree or be uncomfortable with the message. And that is certainly a lesson worth teaching. The very freedoms and principles that the American flag represents include the freedom to stomp on the flag.

There's certainly no question that Francis' decision was hugely controversial, and upsetting to many. But there's also no question that he was teaching a lesson to students about a case that is extremely legally important, and that he likely expected to spark an valuable debate about constitutional rights, particularly when they protect those who do something widely considered to be offensive. Though there's certainly nothing wrong with disagreeing with Francis' actions, and while it can also be argued that he could have taught the lesson differently, it's important to note that the country's highest court has already indirectly ruled that he was within his rights to do it. And attacking him on social media doesn't exactly change that. The constitution and the First Amendment protect protest — even when it involves the flag — for a reason, and teaching kids the importance of such protest is exactly what Francis should be doing.