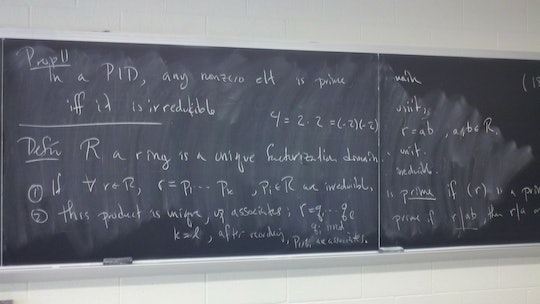 A Teacher Used A 9/11-Themed Math Problem On A Test, & People Are So Pissed

A Massachusetts school is scrambling to apologize after a high school math teacher reportedly used a Sept. 11, 2001-themed algebra problem as part of her curriculum. The question asked students to calculate how long Flight 175 was in the air before it hit the World Trade Center, based on its speed at the time of impact, and the distance it had traveled. This hit particularly close to home for some students' families, as United Airlines Flight 175 departed from Boston's Logan Airport, less than an hour south of Newburyport High School. Nearly half of the victims were Massachusetts residents.

Even more disturbing is the fact that Tom Pecorelli, an alumnus of Newburyport High, was on American Airlines Flight 11, the first plane to hit the World Trade Center. The school even awards scholarships to students in his honor. Pecorelli was returning to Los Angeles, where he lived with his wife. She was pregnant with their first child. His sister, Angela Wadleigh, told Boston 25 News, "It's very disrespectful. That's one of the first things that comes to mind; it's really disrespectful." She wants an apology from the teacher. "Out of thousands of examples you could use in math, this is not one you could use," she said.

Incredibly, it's not all that uncommon for teachers to incorporate offensive text into math problems; TIME reported that an Alabama middle school teacher gave students a quiz last year chock-full of racist overtones and inappropriate subject matter, asking students to calculate "how many tricks per day" a "ho" needed to turn to support her pimp's crack habit, and what percentage of fellow gang members "Tyrone knocked up." According to Snopes, the quiz has been circulating for at least 20 years, possibly longer, and several teachers have assigned it to students over the years.

More recently, a teacher gave Pennsylvania high school students a test with a whimsical code-cracking theme that included an astonishingly flippant reference to poet Maya Angelou's childhood sexual abuse, according to BuzzFeed. And this past February — Black History Month — a teacher asked second graders in California to figure out how many slaves a "master" needed in order to pick a desired amount of cotton, according to NBC Los Angeles.

As a community, the Newburyport Public Schools recognizes the importance of honoring our First Responders and the brave men and women who lost their lives during this terrible act of terrorism. This assignment was not intended to be disrespectful to the thousands impacted by this horrible event. Rather this was an exercise of poor judgement by the educator who intended to use the historical event as a mechanism to engage students in a thoughtful discussion. In the future, we will work with our educators to find more respectful and mindful ways to continue the important and valuable discussions that should take place around these significant events without diminishing or otherwise disregarding the respect and reverence that is due.

The teacher has not been identified, and some locals don't feel that the school's apology was enough. "I thought it was inappropriate," parent Paula Quill told Boston 25 News. "I disagree with that totally, wholeheartedly." Student Andrew Kress told CBS Boston, "It's pretty offensive. 9/11 is a serious tragedy. Thousands of people died that day." Pat Bavis, whose younger brother Mark was on Flight 175, told CBS, "I understand trying to teach education." But using 9/11 to teach math? "That's just totally wrong." The students who received the assignment may be too young to remember the terror attack, but Wadleigh's wounds remain fresh. "It might have been 16 years ago to some people," she told Boston 25, "but to some of us, it's 16 minutes ago. It's something you don't ever recover from. Ever."