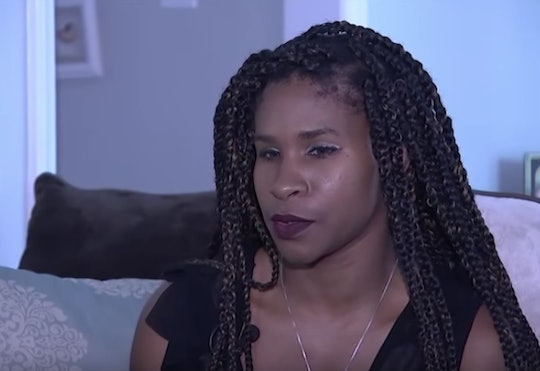 Pole fitness is a widely popular form of exercise and attracts people from a variety of backgrounds. While it isn't always meant as a sexual act, the art form remains taboo in the minds of many. Case in point, this teacher was suspended after a video of her pole dancing was leaked and now she's fighting for her job with Hoke County Public Schools. Romper has reached out to Hoke County for comment, but has yet to hear back at this time.

Kandice Mason is a sixth-grade teacher in Hoke County, North Carolina. And while teaching English is her primary source of income, she also has a side job teaching a pole dancing fitness class. When Mason posted a video of herself pole dancing to her personal Facebook page, Café Mom reported, it was leaked to the school system and she was reportedly suspended from her job at the school.

Since the reported suspension, Mason has spoken out about what happened to her. In an interview with local news station ABC 11 WDTV, she explained that pole fitness is something very special to her. "That's how I stay in shape," she said in the interview. "That's how I feel like I can express myself and have time for myself."

While Hoke County Schools has yet to respond to Romper's request for comment, Café Mom reported that the school's spokesperson, Donna Thomas, said that Mason has been suspended with pay pending an official investigation. When speaking with ABC 11, Mason explained that the school presented her with its policy when suspending her that reads:

As the Associated Press reported on YouTube, Mason does not see her dancing as something to be ashamed of. "It's just an art for me. I just don't see it as negative," Mason said in the video.

When ABC11 WTVD posted a video of the story to Facebook, numerous users came to Mason's defense. Once such person pointed out that she isn't naked in the video:

If a teacher is removed from her job because she is a pole dance instructor then all teachers that take these classes should also be removed from their job. This is ridiculous! She isn’t naked on a stage in a strip club!

Another explained that as a form of fitness, her dancing isn't something to be judged:

How utterly ridiculous! Pole dancing and acrobatics is incredibly athletic. Lemme [sic] guess — they wouldn’t have a problem if she was a gymnast though?

It's wasn't just strangers who spoke up in the comments section to defend Mason, though. Several of the commenters claim to know her personally and spoke to her character and the absurdity of her being suspended. One such person who apparently volunteered along side her stated that she is a single mother:

I volunteered at a child care facility that Kandice was employed at. She did an amazing job with the children in her class. Not to mention that she is a highly educated, single mother. She would be an asset to any classroom she entered. I hope they consider this when they review the situation.

People reported that Mason shared how much the suspension is costing her, because she is a mother: “I’ve worked so hard to try and make sure I can provide for my daughters and our livelihood to have it jeopardized just for doing something that I’m passionate about," she said.

Another on Facebook, who said they went to school with Mason, explained how educating and pole dancing are two huge parts of her life:

I went to school with Kandace and she is a wonderful, incredibly intelligent person. She was always insightful during discussions and passionate about learning and helping others. Dance has always been an outlet for her. Will everyone who takes up this form of exercise as a hobby lose his/ her job as well?

Until the investigation has been completed, Mason's fate as a teacher remains uncertain. But hopefully those responsible for the decision will take more into consideration than just the one video. Along with being a dancer, she is highly educated — along with her teaching certification, she has a masters in psychology, bachelors in English, and a certificate in phlebotomy, according to People — a mother, and a passionate professional woman. I would say that warrants some consideration from the board.