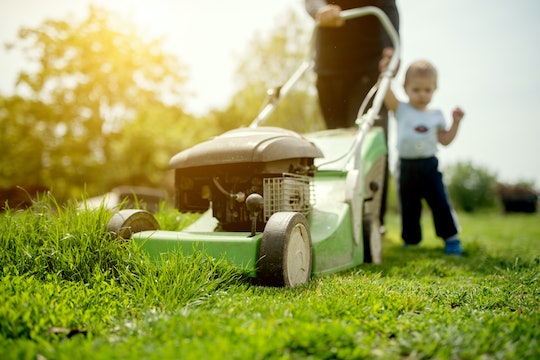 Most moms have heard of helicopter parenting — where a parent hovers over their child and swoops in to help at any sign of trouble. But, a teacher's viral message about "lawnmower parenting" is bringing attention to another parenting style as the school year begins. No, it's not new, but it's one that some believe really isn't helping kids in the long run.

For those new to the term, lawnmower parenting is when a parent essentially mows down any obstacle in a child's way so they never have to face disappointment or adversity, according to The Conversation. As a result, kids can end up unprepared to deal with life's many hurdles, as Rachel Shomate, a single mother and mental health therapist for a school district in South Carolina, explained in Bizwomen.

In a now-viral article posted on the site WeAreTeachers — which has since been shared more than 11,000 times on Facebook and has garnered over 2,200 reactions — an anonymous teacher warns that lawnmower parenting can be detrimental to a child's overall emotional development. "In raising children who have experienced minimal struggle, we are not creating a happier generation of kids," the author wrote in the post shared on WeAreTeachers.

The teacher continued, "We are creating a generation that has no what idea what to do when they actually encounter struggle. A generation who panics or shuts down at the mere idea of failure. A generation for whom failure is far too painful, leaving them with coping mechanisms like addiction, blame, and internalization."

So, what's a real life example of a lawnmower parent scenario? Let's say a child leaves his book report at home. His parent decides to drive it all the way to school, so the child doesn't get an incomplete grade. Instead of letting the child deal with the consequences of forgetting his project at home, his parent bails him out. Some parents might say, "So what, I like helping my kid out when he needs it." But in this situation, the lesson of responsibility and consequences may very well be lost on the child.

In the viral article, the author gives an example of a mother calling in and asking for an extension on her son's writing project. When she asks the mom why the student didn't ask her himself, the mom replies that she has always taken care of this sort of thing for him. Now here's the problem with this. When this child goes off to college, for example, he won't know how to approach his professors for help if his mother always tackled this obstacle for him. This would be a direct result from his lack of experience in real world situations.

According to a piece published in Grown and Flown, Dr. Karen Fancher, a professor at Duquesne University, writes that there are some things you can do now to avoid becoming a lawnmower parent, such as encouraging young kids to speak for themselves whenever possible and ensuring an older child is taking care of communication — such as arranging an appointment or make-up test — on their own. Above all else, according to Grown and Flown, Dr. Fancher emphasizes the importance of trusting children to make good decisions. It's OK to make mistakes; life is a learning experience.

No one wants to see their child struggle, of course. It's in a parent's intended nature to step in and help. But when the urge arises, ask if intervening will help your child in the long run. As the author of the viral article wrote, according to WeAreTeachers: "If we eliminate all struggle in children’s younger years, they will not arrive at adulthood magically equipped to deal with failure."

This is a lot to digest for any parent, so it's no surprise that this article drew so much attention from parents and teachers alike. One such person wrote on Facebook:

When I was 7 years old my teacher asked my parents what they wanted for me this school year. My mom replied with “struggle and failure.” Astonished my teacher asked why and my mom responded “because everything has always come so easily for her I am afraid she won’t learn coping skills and how to build her self up for when she ultimately does not succeed at something."

And this may be the exact lesson the author wants readers to take away from the piece.

The moral of the story? Failing is OK. When kids fail, they learn. It might not be pretty to watch, but sometimes the outcome is worth it in the long run.