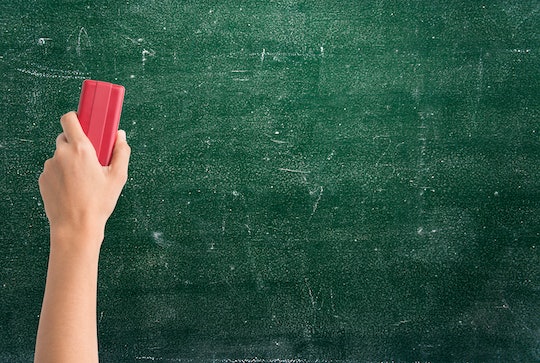 Kindergarten Teacher Pens An Impassioned, Viral Post Explaining Why She Left Her Job

If you're a teacher or know one, then you're probably already well aware that the job can be tough. It sometimes can be difficult to sum up all of the reasons why, but this kindergarten teacher's viral post about why she decided to leave her job did so perfectly. Not only did she highlight the profession's main problems in a succinct list of five points, but she also touched on an often ignored topic — teacher mental health.

A popular misconception about teachers is that they have it easy because they get summers off, have multiple holiday breaks, and can supposedly go home as soon as school lets out. But anyone who is familiar with the profession will tell you that teachers work all year round and put in overtime hours just about every single day of the week, including weekends. This is because many teachers are working to serve large classes with little resources and will do anything to help their kids succeed, whether it's staying after school to help out with homework or paying a home visit. You fall asleep worrying about your students and they're your first thought when you wake up, always feeling concerned that you're never doing enough. I can relate to this sentiment because I was a teacher, my sisters are teachers, and many of my close friends teach.

I've seen plenty of posts about the grind of teaching before, but no one has articulated it as well as Jessica Gentry, a former kindergarten teacher at Stone Spring Elementary School in Harrisonburg, Virginia, according to Good Morning America. In five hard-hitting paragraphs published to Facebook on June 13, Gentry summed up why she had decided to leave her beloved teaching profession after giving it her all for 12 years.

The goal of the former teacher's message is to explain "why those who ooze passion for teaching are leaving the occupation like their hair is on fire," a problem that has became increasingly prevalent in America in recent years.

Gentry first tackled parental involvement, a key element in student behavior. If a child is facing "unstable parenting/coparenting situations" or is living with a parental figure who is overworked, you often see misbehavior at school because "kids behave in undesirable ways in the environment they feel safest," Gentry explained on Facebook. But instead of adequately addressing the reasons why children might act out, society often brushes it off, relying on the old cliché that "the kids have changed," she argued.

She added, "The old excuse 'the kids have changed.' No. No friggin way. Kids are kids. PARENTING has changed. SOCIETY has changed. The kids are just the innocent victims of that."

Gentry then addressed the current technology craze, a well-meaning yet often misguided attempt to create better learning environments. But in my personal experience, teachers aren't properly trained on how to best use these devices in the classroom, which can lead to chaos and confusion among students. Gentry highlighted this exact problem writing on Facebook:

In the midst of all of this... our response is we need to be "21st Century" schools. 1 to 1 student to technology. Oh. Okay. So forget the basics of relationship building and hands on learning. Kids already can't read social cues and conduct themselves appropriately in social settings... let's toss more devices at them because it looks good on our website.

On top of all of technology drama, teachers are getting pulled out of their classrooms for "training." My planning period was often taken away from me so I could sit in meetings, many of which I don't remember. But I do remember the rush of always feeling underprepared, a point Gentry perfectly articulated in her post, sharing this anecdote: "Just this year, a new math assessment was introduced for K teachers. We had to attend a training on a school day (time missed with students) then it took us THREE WEEKS to administer it... one on one... to 21 students. Such. A. Waste. All of the info I could have told you about them without taking away from precious instructional time."

Gentry's next point addressed parental behavior directly, which can be a tricky issue to navigate. She accused many parents of not cooperating with teachers, writing: "Instead of holding parents accountable... and making them true partners, we've adopted a customer service mindset." Gentry suggested that this attitude leads to a breakdown in parent-teacher relationships, which ultimately affects students.

I agree with this take, but it can be difficult to get through to some parents, especially concerning those who feel overworked and stressed out. Ultimately, stakeholders need to quit the blame game and commit themselves to better supporting the teacher-parent dynamic, coming up with new resources and tools to do so.

Gentry ended her post with an important message about mental health, highlighting the important yet often under discussed reality that teachers can struggle emotionally with the job.

"My mental and physical health was in jeopardy every.single.day. Knowing that your kids need and deserve more than they're getting," she penned. "Sitting in one meeting after another, begging for more support, only to be told 'don't lose sleep over them'... when you LOVE your kids and are PASSIONATE about your mission... these messages tear you apart."

Yep, that note hits home in more ways than one — it can't be reiterated enough that teachers lack the emotional support that they need and deserve. It would be great if more awareness is brought to this issue, especially on the national level. I'd love to see a 2020 presidential candidate address teacher mental health in one of their education proposals, for example.

Of course, it's no secret that America's education system is complex and flawed, as Gentry noted in her viral post. But it's important that more teachers like her speak out because these issues can't be ignored any longer. Students shouldn't have to lose qualified and passionate teachers over solvable problems.