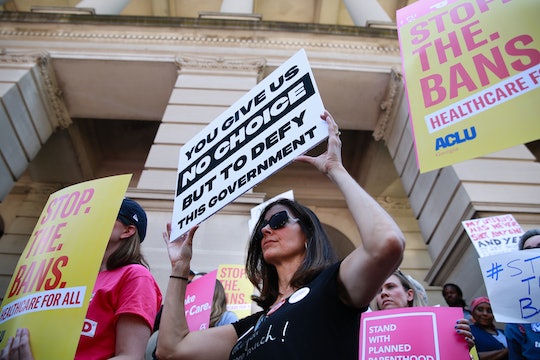 The constitutional right to access abortion care is under attack, as some states move to levy further restrictions on abortion. No this isn't a excerpt from the Handmaid's Tale, it's real life and it's happening right now. Today, the House Judiciary Committee held a hearing on threats to reproductive rights in America. As affect from abortion law changes begin to take shape, young women like HK Gray are sharing their stories. This teen mom had to get her parent's permission to get an abortion permission to get an abortion, and it highlights the unnecessary burden anti-abortion laws place on pregnant people.

Texas native, HK Gray became pregnant at just 15 and had her first daughter at 16. When she became pregnant again at age 17, she sought an abortion but could not get one due to lack of parental consent, according to her statements in court. One parent was homeless, and the other incarcerated. She sought a judicial bypass to prove she was mature enough to make the decision for an abortion, even though she was already a parent herself.

She did this with the help of the Jane's Due Process, an organization that helped her find a clinic and a lawyer to obtain the judicial bypass. Gray said in her testimony:

"When I tried to get an abortion, I didn’t realize how hard it would be. Texas requires parental consent for anyone under 18 years old. It’s not that my parents would have opposed to my decision, it’s that they weren’t physically able to give the consent," Gray said.

She didn't understand why other people could make decisions about her own body, when it wasn't any of their concern.

"This was a new concept to me because it’s something I didn’t have to do when I had my daughter. It seemed weird to me that I didn’t need anyone’s permission to become a parent, but I needed to prove to the state that, as a parent, I was mature enough to not have another child."

And if you're wondering why she wasn't on birth control, the state of Texas requires parental consent for that too.

"My actual abortion was pretty straightforward. The providers were kind and treated me like an adult. I was glad to get back home to care for my daughter," Gray said to the committee."

But the double standard was not lost on her.

"The irony of this whole experience is that I could make medical decisions for my daughter, but not for myself. When I take my daughter to see a doctor, I’m treated like an adult, but I couldn’t get routine care at the dentist or get birth control without my parents’ permission."

Unfortunately, Gray is not alone in her struggles, as many other pregnant people will face similar hurtles in an attempt to receive abortions in states that make it almost impossible.

You can find the full transcript of Gray's testimony here.

Actress Busy Philips was also one of the eight women who spoke at today's hearing, revealing that she had an abortion at age 15, according to CBS News.

"The statistic is that 1 in 4 women will have an abortion before age 45," Philipps said. "That statistic sometimes surprises people. And maybe you're sitting there thinking, 'I don't know a woman who would have an abortion.' Well, you know me."

You can find the full transcript of Philipps' testimony here.

States in favor of abortion rights are concerned about the now conservtive Supreme Court overturning Roe vs. Wade (this needs to be italicized) and are anxious to get pro-choice laws on the books at the state level. On the other side of the aisle, Republican states are working towards an all out ban.

In May, Georgia passed the controversial heart beat bill that bans abortions after six weeks of pregnancy, before most people know they're pregnant. Others states, like Alabama, Missouri, and Ohio followed suit, according to Fortune.

Most people find out their pregnant at the six or seven week mark, meaning most people wouldn't even know they are pregnant and then it would be too late get an abortion, according to Self.

But there are states that refuse to hinder a pregnant person's access to abortion. In recent weeks, both Nevada and Illinois have passed bills that repeal restrictions against abortions, according to Vox.

Texas isn't the only state that requires parental consent for a minor to obtain an abortion, according to the Guttmacher Institute. Most states require the consent of at least one parent, up to 24 to 48 hours before the procedure. But there are still states that require the approval of both parents.

So what happens if a parent says no? The majority of states allow minors to obtain a judicial bypass procedure, like Gray did, that allows a minor to receive court approval for an abortion without their parents’ knowledge or consent. Even then, the abortion seeker may be subject to a judge's decision on whether or not they are mature enough to obtain one, as Gray did.

Imagine being a scared teenager, not knowing what to do or where to turn, and then having to get parental consent or a court ordered approval? While abortion is not illegal, restriction like these make it nearly impossible for teens who don't have the proper resources to get much needed care.

Right now, 37 states require parental approval before a minor can obtain an abortion, according to Guttmacher.

Abortion rights and overall women's health issues will continue to be at the forfront of bipartisan legislature. And, it's bound to play a big part in the upcoming presidential election. Hopefully, the next generation of young women will have the right to make their own choice in a state that allows them to honor their reproductive rights.