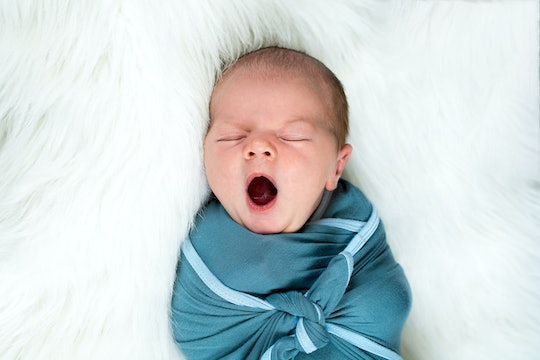 This Test Lets You Predict What Your Baby Will Look Like Before They're Born, & It's Mind-blowing

Every parent knows what it feels like to be anxious and excited to meet your kid for the first time. You have no idea what they'll look like, or what sort of things they'll grow up interested in, or who they'll be as a person. But now, parents might be able to learn a few details about their baby before they're born, thanks to this amazing new technology. A startup in Denver claims that it has a test that can use DNA from possible parents to predict what a future baby might look like, or even how they might act. But how accurate is it, and is it really a good idea?

The new startup, HumanCode, recently developed a test called BabyGlimpse, which uses DNA from a couple to guess how their future child might look and act, according to Wired. On the BabyGlimpse website, the company describes the test as an "informational experience," rather than a straight up DNA test. The website read:

Revealing the brighter side of personal genomics, BABYGlimpse is a fun and informational experience, not a medical test. We call it “sunshine science”, a journey into the unique characteristic and quirks that couples can compare and share, and see what they might pass along to the next generation.

The test may be able to predict traits like skin, hair, and eye color, according to Wired. But it could also predict the kinds of snacks a kid might prefer, depending on the genes involved.

The test/app seems focused on revealing the small, exciting details about future babies, rather than some of the more concerning stuff potential parents sometimes have to think about — like health challenges. BabyGlimpse co-founder Jennifer Lescallett, a mother of three herself and a former genetics research associate, told The Baltimore Sun:

BabyGlimpse is sort of like the bright side of genetics. We’ve coined it sunshine science. You get to look at the fun part of your potential future baby versus some of the scary stuff.

And while, yes, a test like this could be really entertaining for couples, experts say that they have concerns about genetic health standards that even people using a silly app like BabyGlimpse need to be aware of.

Health care professionals say they have concerns about the privacy of users who turn to tests like BabyGlimpse, and issues with the "lack of overall regulation in the field" when it comes to the genetic health and testing. Natalie Beck, a senior genetic counselor at the Johns Hopkins Institute of Genetic Medicine, told The Baltimore Sun:

Privacy is an ongoing and major concern for genetic health professionals. A company that is getting a DNA sample, even if they’re only assessing and revealing very targeted regions or genetic risk points for whatever they’re analyzing, they technically have somebody’s entire code.

HumanCode did not immediately respond to Romper's request for comment on potential privacy concerns regarding BabyGlimpe or with any further comment on the test in general.

But if parents are willing to take a risk and hand over their DNA, BabyGlimpse does have the potential to be a super interesting test for couples to play around with if they're considering having kids, and the test is already available for purchase. It's available on HumanCode's website for $99.98, and then users need to send in a DNA saliva test kid and download the BabyGlimpse app for iPhone or have a way to look at the results online once they're available.

BabyGlimpse can tell future parents about the likelihood of their kid being tall, or good at math, or hint at potential allergies they can watch out for, Wired suggested. Though, of course, the predictions are based on percentages, and can't be absolutely accurate, 100 percent of the time.

And it at least sounds like more fun than DNA scans for babies, which look for "disease-causing variations" in an infant's genetic code. A test like that is now offered in at least one hospital in Boston, in addition to the blood test for about 30 conditions that every newborn in America is supposed to get, according to CBS News.

The truth is, the test that HumanCode offers couples cannot completely, perfectly predict exactly what a baby will look or act like. It can give potential parents an idea of what their kid might be like, but the only way you can know for sure is to meet the kid, and see who they end up growing into. You know, like parents have been doing for centuries.