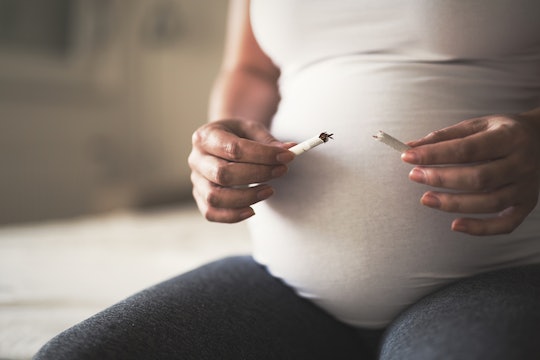 Despite all the debate and opinions regarding prenatal health, one thing's pretty set in stone: Don't smoke while you're expecting. Smoking is an addiction, though, and breaking the habit requires different strategies for different people. In order to help out the cause, this text messaging service is helping pregnant women stop smoking by using daily reminders that are sent right to your phone. Researchers have found the method to be somewhat effective, so if you or someone you know is having some trouble cutting out cigarettes, you'll want to sign up online right away.

The research, conducted at the Milken Institute School of Public Health at the George Washington University (GWU), "helped some groups of pregnant women quit smoking during pregnancy," lead author Lorien C. Abroms, an associate professor at GWU, explained to MedicalXpress. Called "Quit4baby," the service had positive results within the 500 women tested. Subjects enrolled in both Quit4baby and Text4baby — another similar service (with an app component) focused on prenatal health, which has shown to promote healthier drinking habits in pregnant women.

Users who sign up online will "receive free text messages three times per week, timed to their due date or their baby's birth date, through pregnancy and up until the baby's first birthday," Text4baby's website explains. Addressing nutrition, health insurance information, doctor appointment reminders, and more, Text4baby makes it a little bit easier for moms-to-be to keep everyone's health in check.

When signing up for Quit4baby, users enroll in their texting program that automates one to eight text messages each day. Users supply their name, phone numbers, and due dates, and also decide then and there when they want to quit, picking either "today" (which the site recommends), "soon," "not ready yet," or "I already quit." The "tips and advice" provided focus on preventing cigarette cravings while reminding women that their health — and the health of their babies — improves with each moment spent avoiding cigarettes. Quit4baby's website shows testimonials from real-life users, who've thanked the service; "I liked getting the tips and texts because it felt like I was getting help without being judged," one woman wrote.

Shaming pregnant moms who smoke can prevent women from admitting they have a problem or from seeking help altogether. A covert operation like a personalized text message service is a much-needed resource, and the fact that it's free makes it available to women who may not be able to afford counseling or other costly solutions.

By combining forces from Quit4baby and Text4baby, researchers found that 16 percent of pregnant women stopped smoking after three months. Researchers found that 11 percent of users using Text4baby alone also were able to quit for the duration of pregnancy. Because of this slim margin of difference, though, researchers have concluded that there's not a significant link between Quit4baby and smoking cessation.

Sure, scientifically it might not mean much, but that 4 percent — those 20 women — who saw positive results during and after the fact would likely disagree (their families and babies probably would, too). According to the American Pregnancy Association, 12 to 20 percent of pregnant women smoke, which can lead to so many health risks, including a miscarriage. "A few babies may even die" in their post-birth hospital stays, reminds the Centers for Disease Control and Prevention.

A disappointing reality of the study, however, is that many women did report returning to smoking postpartum. So whereas the program provided positive results during pregnancy, they were ultimately short-lived. Seeking out more lasting solutions, Abroms calls for more programs like Quit4baby that aim to provide tools and resources looking to make better health decisions, according to MedicalXpress. It might not work for everyone, but it certainly doesn't hurt to try.