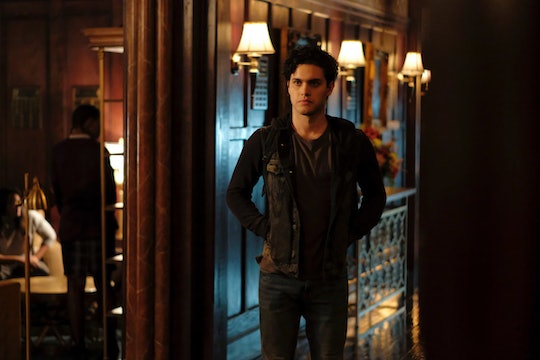 Fans Came Up With An Amazing Theory About Landon On 'Legacies'

Since the first episode of Legacies aired, fans have had one burning question: what’s the deal with Landon Kirby? His mother, Seylah, revealed that he was conceived in a mysterious supernatural prison called Malivore, but it’s still not clear what kind of supernatural background he has. However, fans have come up with an intriguing theory about Landon on Legacies that suggest he might actually be a demigod.

Some fans think that the concept of Malivore may be rooted in Greek mythology, because it shares so many similarities with Hades’ underworld. Hades was a God who was in charge of imprisoning evil souls in his realm, much like Malivore. Considering Landon was conceived in Malivore, some people think he could be the son of a God like Hades, making him a demigod.

Reddit user mannac126 thinks that Landon is actually Hades’ son and that witches, vampires, and werewolves were left in charge to make sure Hades stayed locked in Malivore. “So my theory is that Landon is the son of Hades — creator of Malivore and the first entity to be imprisoned in it,” wrote the Redditor. “When Zeus (Greek mythology) found out about this new underworld type realm he made one witch, vampire, and werewolf lock him away by using the three keys Zeus gave them. So when Seylah was pushed into Malivore, Hades saw it as a chance to get out. When Landon was born he finally had away to free himself of his internal prison. The reason the keys react to Landon is because Landon is part god — Hope can remember things is because she the tribrid.”

Another Redditor, jmg1998, pointed out that the first Malivore lock — an enchanted knife that was kept at The Salvatore School — was only awakened when Landon came near it, which means that the Malivore DNA in his blood may hold the power to unlock Malivore itself. “The blood flowing in his veins as that of Malivore — I think the final lock to unseal the prison is Landons blood,” wrote the Reddit user. “If this theory is true it would [mean] Landon a Demi God and one of the most powerful creatures on Earth.”

So far, Landon hasn’t exhibited any supernatural powers, other than his ability to resist compulsion. Some fans think Landon is an angel or nephilim (offspring of a God), and that his powers could supercede everyone else’s when Malivore is unlocked. “I think he is either an Angel, Archangel, Nephilim or a creature like that or a powerful being who is far more stronger than Vampires,Werewolves and Witches,” wrote Redditor dipper041148. “I wouldn't be surprised if he turns out to be even stronger than Hope, who is a tribrid. Or perhaps he is a powerful creature or entity who was the guardian of Malivore.”

Because Landon has been seen as powerless compared to Hope, Rafael, and the other supernaturals in the school, it would be really cool to see him transform into a super powerful being by the end of the season. He’s a good guy at heart, so if he is a demigod, I sure hope he uses his powers to defeat Malivore rather than join it.