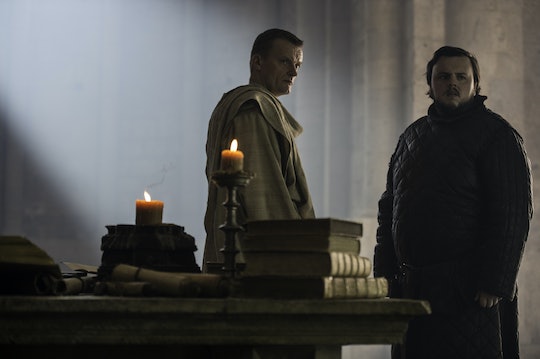 The One Theory About Littlefinger Every ‘GoT’ Fan Should Know About

There's quite a lot of buzz happening over something that you thought had stopped being important after Season 1 on Game of Thrones. But an Easter egg in Sunday's Season 7 premiere episode, "Dragonstone," has got fans eagerly speculating about the possible return of Littlefinger's dagger on Game of Thrones, and just what that might mean for the story. Because whether or not you even remember it, this small object might be one of the most significant props in the show.

Let's go back to the very beginning of Season 1, in the episode "The Kingsroad." Bran and Catelyn Stark were attacked in the night by an assassin who showed up to kill Bran, but instead was killed by Summer the direwolf. Catelyn went to King's Landing to try and find out who sent the assassin, which was when Littlefinger told her the knife belonged to him before Tyrion won it from him in a bet. Assuming Tyrion must have sent the assassin, Catelyn had Tyrion arrested when she ran into him at a tavern, which sparked the war between the Starks and Lannisters, thus setting the events of the entire series into motion.

Here's the thing: we have yet to find out who hired the assassin to kill Bran, or why. We don't even know where the dagger is. In the books, Jaime and Tyrion come to the conclusion that Joffrey must have been behind it, but that's never truly confirmed, and there's been even less mention of it in the series. It was last seen on Ned Stark's desk in King's Landing, but it hasn't turned up since.

Until "Dragonstone," that is. As Redditor rouge_oiseau pointed out, one of the books Sam looks through while he's researching how to kill White Walkers has a picture of that same dagger on one of its pages. The dagger is made of Valyrian steel, which along with dragonglass is one of the few materials that can kill the White Walkers, so it's not exactly random for a picture of it to be in there. But is it simply an Easter egg, or does it point to a more significant role for the dagger in future episodes?

Another Redditor, ejfontenot, even thinks the dagger might be Lightbringer, the sacred weapon used by the prophesied Azor Ahai who will save the world — though if that's true it's going to require quite the explanation from Littlefinger.

But that's not all — there's been one more recent hint at the dagger's return. In a series of promotional covers released by Entertainment Weekly, Maisie Williams was featured in several photos with her character Arya seeming to be in possession of the dagger, which was placed ever-so-subtly on her hip. This raises more questions than it answers — does this mean Arya will be running into Littlefinger and Sansa at some point? Will Arya kill Littlefinger? Will she use the dagger to fight White Walkers? Combine this knowledge with the dagger's appearance in Sam's book, and it seems like fans can expect a reappearance of the mysterious blade sometime soon.