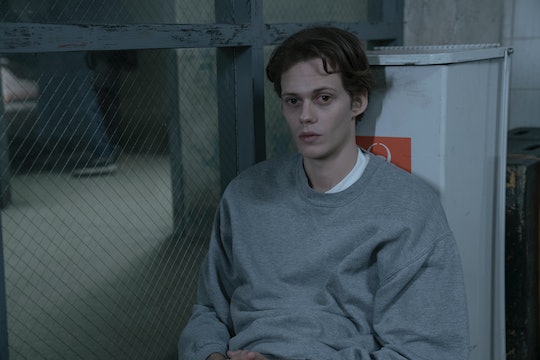 Just five episodes into its debut season, Hulu’s new series, Castle Rock already has the internet buzzing with fan theories. The show’s plot and characters are still super mysterious, but there is one character that appears to be at the center of all things evil. He seems to create chaos wherever he goes, so this Castle Rock theory about “The Kid” has been gaining steam.

Warning: Spoilers for Episode 5 of Castle Rock ahead!

In the fifth episode, Shawshank Prison warden Dale Lacey (Terry O'Quinn) is seen in a flashback talking to The Kid (Bill Skarsgård), explaining that he kept him locked away because he was instructed to do so by God himself — and that it was the righteous thing to do.

In an earlier episode, Alan Pangborn (Scott Glenn) tells the current Shawshank warden, who took the job after Lacey committed suicide, about a letter Lacey sent him. Pangborn tells her, “He said he had always thought the devil was just a metaphor, but now he knew the Devil was a boy, and old Dale said he’d caught ‘em, had locked the Devil in a box.” Pangborn said that from the moment the boy was locked up, it had been, “blue skies and butterflies” in the town, and warned the warden not to ever let "that f*cking kid" out.

So is Pangborn right? Is The Kid the literal devil? Well Reddit users have a different theory. They think he could be another incarnation of Randall Flagg, an evil, supernatural character that shows up in several King novels. The town of Castle Rock has lived in relative peace for several years. But now that The Kid has emerged, coincidentally, the evil is back too. He could be the reason behind prison guard Dennis Zalewski’s (Noel Fisher) killing spree inside Shawshank Prison, and it looked like he turned a family birthday party into a massacre after being released from prison.

In the King universe, Randall Flagg is a powerful dark sorcerer, who's powers include necromancy, prophecy, and an unnatural influence over predatory behavior in humans and animals. If The Kid really has been the reason for all the violence in Castle Rock — well you can see the resemblance. Randall Flagg gets reincarnated several times, appearing in King's book The Eyes of the Dragon, set in a fictional medieval city, as well as in the post-apocalyptic universe of The Stand.

Reddit user EthosPathosLegos to theorized that The Kid is a version of King's character Randall Flagg, a supernatural being who has been featured in a number of his novels. "All of this, the lack of memory, the reincarnation, and the general malevolence The Kid is said to have brought leads me to strongly suspect the character is Kings age old nemesis: Randall Flagg." User Jamesvader96 also thinks that The Kid is Flagg, pointing out that the two characters have similar powers.

Although the series wasn’t written by Stephen King, it was inspired by his fictional world. It's harder to keep track of all the King Easter eggs than it is to find all the the 80s movie references in Stranger Things. So it makes perfect sense that a classic King villain would be the major antagonist on the show. Maybe this theory is spot on or maybe it's not. In either case, I can't wait to see what happens next.

New episodes of Castle Rock air every Wednesday on Hulu.